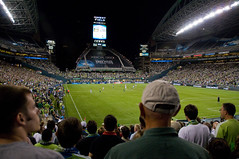 Tonight marks the beginning of another Major League Soccer season when the Seattle Sounders take on the expansion Philadelphia Union.

Seattle’s Quest Field is the toughest stadium to play in and it will be packed and rocking tonight. A real baptism of fire for Peter Nowak and his Union team.

Nowak has taken a page out of Seattle coach Sigi Schmid’s playbook from last season in that he has built has team from the back. He has two good goalkeepers in goal, whether it is Chris Seitz and Brad Knighton, and with defenders Danny Califf, Shavar Thomas, Michael Orozco, Jordan Harvey and Dave Myrie, the Union should be solid defensively.

And they will need to be. The Union are young; an average age of 23, and they play 8 out of their first 10 matches away from home. This season could get ugly quickly in Philadelphia and that is why I expect Nowak to be very defensive minded against the Sounders.

Look for the Union to crowd the midfield with lots of bodies to frustrate the Sounders and try and take the crowd out of the game. So don’t expect tonight’s game to be a soccer classic.

What I do expect is for the Sounders to pressure the Union all over the park, trying to cause turnovers.  During the preseason Seattle has been moving defensive midfielder Osvaldo Alonso further up the field in an attempt to force turnovers in better positions. Schmid wants Alonso to move 10-15 yards up the field, moving him away from the center backs and allowing Seattle to sustain pressure on the opponent.

For the Sounders to be successful this year,  the two “Freds” Montero and Ljungberg need to form an effective goal scoring partnership. If Seattle has a weakness it is the lack of goal scorers on their rosters and they need Montero to step up this season and be that reliable goal scorer.

Prediction:
First games of the season are always hard to predict, but I cannot see anything other than a Sounders victory here. Seattle 3 Philadelphia  0