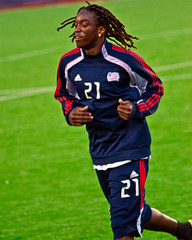 This past weekend the Vancouver Whitecaps mounted one of the most remarkable comebacks in MLS history with two goals in stoppage time to get a 3-3 draw against Sporting Kansas City.

Last night it was Vancouver who were left cursing a late goal as the New England Revolution escaped from Vancouver with a 1-1 draw.

After a tepid opening period the game sprung to life right before half-time. First, Revs rookie Stephen McCarthy saw his header from a Zak Boggs corner kick beat Whitecaps goalkeeper Jay Nolly, but not midfielder Nizar Khalfan was well positioned to clear the shot off the line.

Then a minute before half-time Whitecaps midfielder Gershon Koffie was given a straight red card for an elbow to the head of Pat Phelan.

There was more drama two minutes later when Koffie was issued a straight red card for an elbow to the head of Pat Phelan, reducing the hosts to 10 men.

Eric Hassli was subbed on at halftime and quickly picked up a yellow card for a hand to the face on Kevin Alston, which proved crucial minutes later when Vancouver got a penalty when Boggs pulled down Camilo in the box.

Hassli stepped up and calmly chipped his penalty kick into the net and then decided to pull of his shirt in celebration. Stupid decision as he was giving a second yellow card and sent-off after being on the pitch for only 11 minutes.

New England’s two-man advantage landed less then 20 minutes when A.J. Soares was given a straight red card for a sliding challenge on Harris.

The Revs still had a one man advantage and continued to press the Vancouver defense in search of the equalizer. Chris Tierney’s 82nd-minute free kick was headed for the upper right corner before Nolly tipped it over the crossbar, and then Stolica had an goal called back for a narrow offside decision.

Then deep into stoppage time, Stolica broke Whitecap hearts, taking a ball from Zack Schilawaski and slotting it past Nolly for the equalizer.