Portsmouth all but relegated 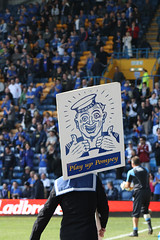 Portsmouth were all but relegated yesterday after they were deducted nine points by the Premier League for going into administration.

“Following the High Court’s decision that Portsmouth FC’s administration is valid the Premier League Board convened today to apply the League’s rules and policies in relation to a member club suffering an event of insolvency,” a Premier League statement said. As a result Portsmouth FC has been deducted nine points with immediate effect. As part of this process the board met with the administrator to agree how we will work together for the remainder of the season to ensure that the club is able fulfil its commitments.”

Administrator Andrew Andronikou earlier revealed that talks with a takeover consortium have yet to lead to proof of funds but that he hoped Portsmouth could come out of administration in “six to eight weeks”.

If Portsmouth cannot come out of administration by the end of this season, they could face a 10-point deduction in the Championship next season, which would wipe out almost any hope of them getting promotion next season back into the Premier League.