More Moves in the East

The New York Red Bulls recently announced that midfielder Dane Richards will be out of action for 3 months due to a right knee MCL tear. The injury occurred in the Red Bulls exhibition game against the Red Bull Salzburg Juniors in early March. Richards’ injury will not require surgery.

Richards was a finalist for the 2007 MLS Rookie of the Year award. He was drafted in the 2nd round in 2007 and started 27 games for the Red Bulls and scored 2 goals and had 6 assists.

Lopez Signs with the Wizards 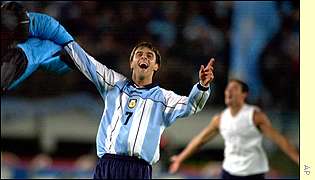 Claudio Lopez a forward from Argentina has recently signed a contract tot play for the Kansas City Wizards. Lopez is a veteran of the Argentina National Team and played for the South American country in the 1998 and 2002 World Cups. He also played for Argentina during the 1996 Olympics, where Argentina lost in the Gold Medal Game earning a silver medal. Lopez is 33 years old and was signed to give the Wizards more scoring options. He joined the team in Buenos Aries, Argentina where the Wizards are holding preseason training until March 21.

Santino Quaranta recently signed with DC United and will be rejoining the team after being away for two years. DC United drafted him in 2001 when he was only 16 years old. At the time he became the youngest person ever to sign with a club in the MLS. He was in the Nation’s Capital for 5 years before he was traded to the Los Angeles Galaxy in 2006 in the middle of the season. In 2007 Quaranta was traded again the New York Red Bulls, but he did not play long in the Big Apple because of an injured toe.

Looking for a fresh start to his career Quaranta had been practicing with United in hopes of signing with the club. His preseason was a solid one and United brings him back for a second stint. He is still only 23 years old and the forward will give the newly stacked United offense another scoring option. He has started 3 games for the United States National Team and overall has 9 appearances for the U.S.