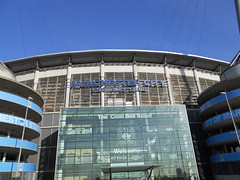 Shaun Wright-Phillips provided a reminder that he may still have a role to play at Manchester City by scoring the second goal in the club’s 2-0 win over Mexican club America in a friendly on Saturday.

Wright-Phillips, who is the subject of seemingly permanent transfer speculation as super-rich City continues to cram its squad with top-class players, scored in the 27th minute.

Ryan McGivern, who has spent the past two seasons on loan at Leicester City and Walsall, opened the scoring in the 17th. Edin Dzeko and Wright-Phillips easily worked the ball downfield through America’s defense to set up the 21 year-old from Northern Ireland.

It was exactly the type of game manager Roberto Mancini hoped for when he told Wright-Phillips that he needed to play well this summer for a chance to stay at the club.

“Shaun is a good player and it turned out to be a good day for him,” Mancini said. “He’s a good guy. Every time that that I have to choose a player for these games it’s difficult because these are good guys. Today he played very well and scored a goal.”

Dzeko played a role in the second goal, controlling the ball then dishing it to Wright-Phillips, whose 20-yard shot easily beat America goalie Armando Navarrete.

America missed two chances early after halftime and didn’t get much else going while losing for the first time in four matches this summer.

Manchester City will play a against the Vancouver Whitecaps on Monday.