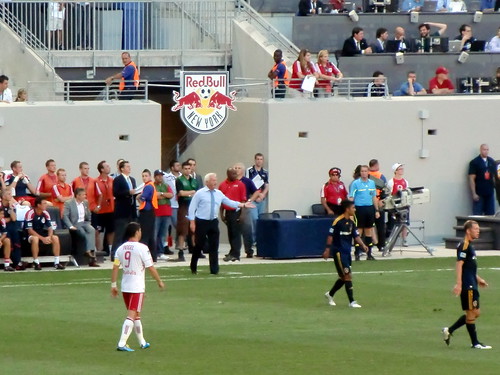 New York went into the second leg leading 1-0 on aggregate after winning the first leg last week in San Jose. Everyone expected the Red Bulls to progress, but nobody told the Earthquakes that.

The Earthquakes got two goals from Bobby Convey, before  Juan Pablo Angel, in likely his last game for the Red Bulls, tied the score on aggregate in the 78th minute, but three minutes later Chris Wondolowski send the Quakes into the MLS Eastern Conference finals where they will face the Columbus-Colorado winner.

This is a great result for San Jose, but it is a disaster for New York. The Red Bulls have spent huge this summer adding Thierry Henry (at $5.6 million this year ) and Rafael Marquez ($5.54 million) to go along with Angel ($1.92 million), and to not even make it to the conference final is a massive failure on their part.

“I can’t be disappointed with the number of chances we had,” Red Bulls coach Hans Backe said. “We could never forgive ourselves if we just played back (after Angel’s goal) and just defended. We had to just give it a go. Our mindset was to win.”

Naive comments by Hans Backe. You had just been given a lifeline to get back into this game with Angel’s goal. To concede again three minutes later shows a lack of defensive discipline that your team has not shown all season. The only question now is whether New York’s collapse will cost Hans Backe his job. I believe it will.