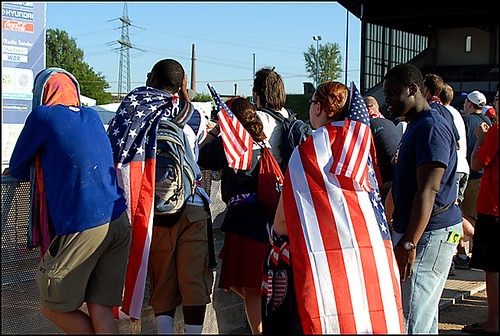 It was a tough night for U.S. soccer. The chance to get to a World Cup semi-finals is not something that comes along every four years and I, like most U.S. fans, feel that the U.S. blew a great opportunity to achieve that today.

In an interview after the game Landon Donovan said the U.S. was naive and that was true. You cannot continue to win at this level if you are always playing form behind and that was true today against Ghana.

The first Ghana goal came after only 5 minutes and the game winner came 3 minutes into extra time. As Tim Howard said:

“We felt like we had a great opportunity. We just gave ourselves too much of a mountain to climb. We just couldn’t come back.”

Already there have been stupid blog posts that the loss was due to Bob Bradley. I disagree. For the most part I think Bradley had a good World Cup. He was aggressive with his substitutions, especially against Algeria.

You can question his decision to start Ricardo Clark today instead of Edu, especially when Clark was at fault for the Ghana goal. But how many coaches do you know who would replace Clark with Edu after only 30 minutes? Bradley knew he had made a mistake, but at least he did not wait until the 80th minute to make a change, he made a change earlier enough so thay the U.S. still had a chance to get back into the game.

Replacing Bob Bradley is not the answer. He has had the most successful two years of any U.S. coach ever!

The U.S. just was outplayed for long portions of the game today. Ghana were a better team. You can see why they won the under-20 World Championship.

But the U.S. still had four of five good opportunities to score today and they didn’t and that is the difference between a goods team and the best teams. Both Findley and Altidore had great chances to score and failed. If that had been Fernando Torres or Diego Milito with those chances, the score would have been different.

And that is that the U.S. is lacking. Some class and composure  up-front.  For the first time in this World Cup I saw a U.S. midfield that had the ability to control games and create scoring chances. There has been a huge leap in the level of performance from Bradley, Donovan , Dempsey, Edu and Feilhaber and that is good for the future of U.S. soccer.

But what the U.S. needs to find now is a goalscorer.  A task that is easier said than done. But if you look at the the top teams in the World Cup they all have a target man that they can rely on for a goal.

The U.S. got no goals from its forwards in the World Cup, even though they all had chances in every game. Bob Bradley kept switching them, hoping to find one that could get hot, but none of them did.

If the U.S. is the progress to the next level, they need to find that center-forward who is clinical in front of goal. It’s not Altidore, Findley or Gomez. That much we have learnt.