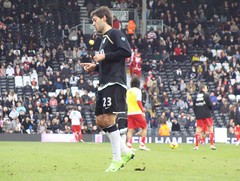 The goals helped Dempsey move past Brian McBride and Steed Malbranque, who both previously scored 32 league goals for Fulham.

The American midfielder hooked a half-cleared corner into the net after 15 minutes and tapped in Eidur Gudjohnsen’s flick-on 3 minutes into the second half to take his tally since joining Fulham in 2007 to 33 goals.

The victory extended Fulham’s unbeaten run at Craven Cottage to seven matches, during which they have picked up 19 points out of a possible 21 to banish all thoughts of relegation for another season at least. The three points also allowed Fulham to move into the top half of the Premier League standings to ninth, one spot and four points behind Bolton with four matches remaining.

After the game Dempsey believes the only way For Fulham is up.

“I would like to think we could do what we did in the past. That we could be fighting for Europe and push on from there. We got to see the way things go but I don’t think [last season] was a fluke. I think we have the quality here and hopefully we can show that. I would like to think that [we are safe] but there are still four games left and you don’t want to be waiting until the last game and stressing. I think we are trying to look up, we are trying to make sure we finish in the top half because we feel that we have the quality in our team that we should be a team in the top half. That is the main goal now in our four games left.”