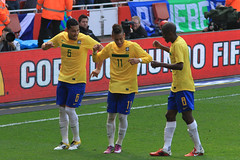 One of the great soccer tournaments in the world kicks off Friday as Brazil will attempt to win its third straight Copa America title. The world’s oldest continental tournament, the Copa was first staged in Argentina in 1916 and has been graced by some of the greatest players in the game

The 2011 might be the most formidable Copa ever played due to the strength in depth of the South American national teams.

The favorite to win Copa 2011 is holders Brazil. The Samba boys have been in transition since the World Cup in South Africa. Gone are the likes of Luis Fabiano, Kaka, Ronaldinho and Adriano. Instead Brazil will turn to a new generation of stars like Neymar, Alexandre Pato, Lucas and Paulo Henrique Ganso.

Neymar, who led Santos to the Copa Libertadores title last week, is the most talked about player in world football with Real Madrid, Barcelona, Chelsea and Manchester City all vying to buy the 19-year-old forward.

Brazil’s build up to the Copa has been buoyed by the recover from injury of Ganso and Pato, and both players will play in the tournament.

As always, Brazil’s biggest rival is Argentina, who are hosting this tournament this year. Playing at home and with Lionel Messi, Argentina seems to have an edge, but Brazil has dominated the competition in the last decade.

Argentina kicks off the tournament in La Plata on Friday when they play Bolivia. A win could galvanize the team and nation. A draw or loss will heap more pressure on Lionel Messi who has never been able to produce his Barcelona form for his country. It doesn’t matter how many trophies Messi wins at Barcelona. He can never be considered one of the all-time greats alongside Maradona and Pele until he wins trophies with Argentina. The longer that takes, the more pressure gets put on his shoulders.

It should be Brazil v Argentina in the final on July 24th. But there are enough questions about both squads, that makes this tournament worth watching.

All of the teams will play each other team in their group and the first and second place teams in each group will advance to the quarterfinals, along with the two best third place teams.