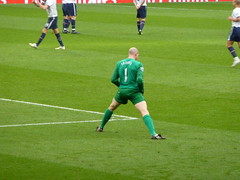 Aston Villa and former US goalkeeper Brad Friedel has been declared bankrupt at a court hearing in Macclesfield.  The cause of Friedel’s bankruptcy is a soccer academy he set up under his name in Ohio in 2007.

It was meant to be a non-profit-making venture, but it lost money heavily and court documents show Friedel and his company owed almost £5 million last August and lender RBS Citizens was forced to take action. Friedel’s home in Ohio has been repossessed.

A spokesman for Friedel is quoted in the Mirror as saying:

“This is a technical bankruptcy and it is not anticipated that it will be in place for long as an application for an annulment will be submitted in the next few days. Arrangements are in place to deal with the issues which gave rise to the bankruptcy.”

The 39-year old is out of contract at Villa in the summer, and was probably hoping to retire or maybe move back to the U.S. for a season or two a la Kasey Keller. But MLS does not pay the £40,000 a week that Friedel is currently on a Villa.

So Friedel might be forced to spend another year or two playing in the Premier League so he can rebuild his bank account. Even at his age, there will be several Premier League teams willing to sign Friedel next year, based on his current form.