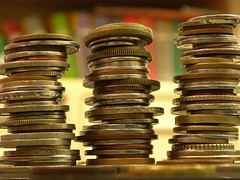 I wrote earlier that former Real Madrid director general Jorge Valdano believes that Barcelona and Real Madrid will abandon La Liga for a European league if their dominance of La Liga continues.

The dominance of Barca and Real derives in part from their control of revenue from TV rights, which gives them a far bigger share of the pot than rivals in other major European leagues. Spain has yet to adopt the system of collective bargaining and income sharing used in other competitions like the Barclays Premier League.

In this table, you can see the differences between the top teams in all the European leagues. The last row indicates how much money the last-place team gets in revenue from each league.

Unless Barca and Real Madrid agree to a more equitable split of the TV revenues, La Liga will turn into the Scottish Premier League. A league where everyone knows that only two sides will contend for the league title before the season starts.

Yes some Spanish sides like Atletico Madrid and Villarreal have challenged these two giants for a season or two before they were forced to sell their best players, but it is a long time since anyone launched a substantial challenge in Spain that lasted four or five seasons.