Italian national team earned a pretty tricky draw for their Euro 2012 campaign as Cesare Prandelli’s team are being paired with the likes of Spain, Croatia and also Republic of Ireland.

Among those three opponents, the Spaniard are obviously the hardest one on paper but Prandelli also share his concern for the other teams, especially Ireland, who is being coached by an experienced Italian tactician, Giovanni Trapattoni.  Read more... (335 words, estimated 1:20 mins reading time)

Italy national team continue their positive result ahead of the upcoming Euro 2012 qualification after successfully beating home team, Polandia 2-0 in a friendly match on Friday.

Two goals from Mario Balotelli and Giampaolo Pazzini gave Cesare Prandelli a confidence boost that his attacking line up can still be count on despite the absent of Giuseppe Rossi and Antonio Cassano, who both could miss out on the competition due to long term injuries.  Read more... (434 words, estimated 1:44 mins reading time)

Italy ends their Euro 2012 qualifier campaign in convincing fashion by beating North Ireland 3-0, with Antonio Cassano playing an important role on the victory as the Ac Milan attacker bagged two goals on that match.

Beside establishing Cesare Prandelli’s trust on him ahead of the Euro next year, Cassano also announced his retirement plan to public, revealing that he only wants to play football for three or four more years again and retire right after participating in a World Cup.  Read more... (471 words, 1 image, estimated 1:53 mins reading time)

Injury problems reportedly are looming on Italian national team camp ahead of their Euro Qualifying match against Serbia on Friday, October after reports from the media suggested that Gli Azzurri will likely to be playing without the likes of Giampaolo Pazzini, Domenico Criscito, Mario Balotelli, Federico Balzaretti and maybe even Giuseppe Rossi.

The Italian media revealed that those players especially Pazzini, Balotelli and Criscito who are confirmed to be leaving the national team training camp and send back to their clubs in order to receive more intensive care for their injuries.  Read more... (333 words, estimated 1:20 mins reading time)

Former Italy striker Giuseppe Signori was among 16 people arrested for in the latest match-fixing scandal to rock Italian football. in a co-ordinated sting by Italian police on Wednesday.

The current scandal is focused on ex Serie A players and current players from both Serie B and Serie C as well as club directors from the lower leagues, all suspected of being part of an organisation that rigged games to fix bets.

Eighteen matches are under investigation including this season’s Serie A encounter between Inter Milan and Lecce, while matches involving newly promoted Siena and Atalanta are also being investigated.  Read more... (373 words, 2 images, estimated 1:30 mins reading time)

Another intriguing match showed at the 2010 World Cup as the raining world champion Italy challenged New Zealand, a match that on paper looked to be an easy game for gli Azzurri turns out to be a disaster as they fail to get the three points from the Oceania representative. It was pretty much a horrible game played by Marcello Lippi’s side as they fell down first through another scrappy dead ball situation, which was not that different from the goal they conceded against Paraguay.

Unlike the previous game, Italy did manage to get level before the second half however after Iaquinta’s perfect penalty gli Azzurri never seems to pick up the pace and tempo needed to unlock the all Whites tough defense. As I already mentioned after their game against Paraguay, Marcello Lippi’s side is dying for some creative spark to connect the midfield and attack, this game now gives more vivid evidence of that needs.  Read more... (572 words, estimated 2:17 mins reading time)

The Italian national team started their first game in the World Cup with a 1-1 draw against South American counterparts Paraguay despite having more of the ball possession. On paper the result isn’t actually something horrible for the Azzurri, however there were some negative aspects that needs to have a close attention from Marcello Lippi if he still expect his team going far in the tournament such as the lack of creativity, sharpness and Buffon’s injury.  Read more... (511 words, 1 image, estimated 2:03 mins reading time) 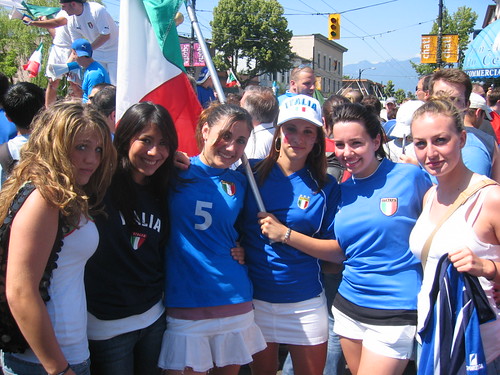 The Team: Those of you who were exposed to my Japan preview recently have heard enough about the Mario Bros., so I will spare you further Italian stereotypes. Instead, I will educate you about the Italian National Soccer Team, or as they are known in their homeland, the Azzurri. They’ve been to the World Cup 16 times, and they won the whole damn thing 4 times. Their goalies are stoic. Their defenders are solid. Their slippery mids and forwards… greasy?  Read more... (255 words, 2 images, estimated 1:01 mins reading time)

Italy came from behind to defeat the United States 3-1 in their opening Confederations Cup match in Pretoria, with American born Giuseppe Rossi scoring twice to beat a gallant 10 man U.S. team.

The U.S. had been reduced to 10 men when Ricardo Clark was sent off on 33 minutes for an ill-timed lunge on Gennaro Gattuso. The tackle was a foul, but it did not warrant a straight red card,

But then the US went 1-0 up when Jozy Altidore was fouled by Giorgio Chiellini in the penalty area and Landon Donovan stroked home for 1-0 half-time lead.  Read more... (273 words, estimated 1:06 mins reading time)

The U.S. gets involved in Confederations Cup action Monday with a game against the World Cup holders. The match will be broadcast live on ESPN and Telefutura with a 2:25 ET kickoff.

“Italy is going to be favored,” U.S. captain Carlos Bocanegra said. “The pressure will be on them, and we want to go out there and show that we can play with them and get a good result. Any time you get a chance to play Italy or another top team like the ones we will be facing is great. This is how you challenge yourself, and it’s what you measure yourself against. These are the best teams in the world and we want to see how we rate against them. It’s a good challenge for our team.”  Read more... (464 words, estimated 1:51 mins reading time)