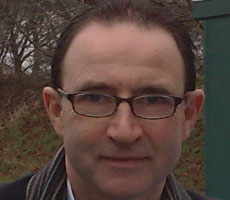 Sunderland have wasted no time finding a replacement for the fired Steve Bruce by targeting the best manager available for hire: Martin O’Neil. By all accounts O’Neil is close to agreeing to take over at the Stadium of Light and could be in the stands for Sunday’s away match against Wolverhampton.

Martin is reported to have met Sunderland’s owner and chairman Ellis Short on Thursday evening in London to negotiate a deal.

Sunderland are currently in 16th place in the league, two points above the relegation zone after winning only two of their 13 league games this season. A run of form that led to Bruce’s firing.

O’Neill built his managerial reputation at Wycombe Wanderers before successful spells at Leicester City and Celtic. He joined Villa in 2006 and led them to three straight sixth-placed finishes in the Premier League and the Carling Cup final before resigning before the start of the 2010-11 season.

Sunderland is a big club and a great opportunity for O’Neil. He has been successful wherever he has gone and I see no reason why he will not be successful at Sunderland. His challenge will be to find a goalscorer to replace the departed Bent and Gyan.