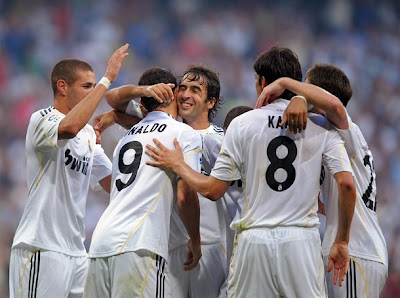 After three weeks it is still hard to figure every team out, but I do know one thing for sure.  Real Madrid and Barcelona are both really, really good.  After that expert analysis lets review last weeks matches.

Deportivo La Coruna has showed early in the year that they are a tough opponent for any squad they face.  Real Madrid could only handle the club by a goal in week one and last week D.L.C. handled Malaga 1-0.  But no such luck this week.  Reeling club Espanyol would pull off the unlikely upset 3-2 and it’s the club’s first victory off the year.  Congrats.

As for some of the other matches Mallorca put on a goal scoring show for their home fans in a 4-0 pounding of Tenerife.  Sevilla continued to play outstanding defense in a 2-0 road win over Osasuna.  Malaga fell at home to Racing Santander 1-2.  Almeria was able to handle Roberto Soldado and Getafe in a 1-0 victory and Valencia finished their home match with Sporting Gijon with a 2-2 draw.  Villa would score twice in the match including with a man advantage late in the match, but Sporting would score a man down in the 86th minute with an Arnolin Gregory equalizer.

So there are three undefeated clubs left.  Barca who destroyed Atletico Madrid 5-2 with two Messi goals.  Atletico Madrid continues to fall down the table as Barca looks like they are the unmovable first squad.  Real Madrid would also stay a top squad with a 5-0 victory over Xerez including two Ronaldo goals.  And Athletic Bilbao would also stay perfect with a 3-2 victory over Villareal.