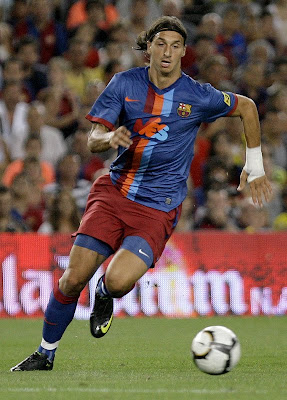 The fifth week of La Liga action would bring some of the best storylines and most thrilling drama.  Only one match was decided by more then one goal easily making this week the best so far this season.  One unbeaten team remains as one more powerhouse has fallen.  Who was it?  Let’s starts this weeks review.

Getafe was able to snap a losing streak with a win over Osasuna 2-1 in a game of likely bubble clubs for the relegation zone by the end of the year.  Valladolid was able to muster a 2-2 draw against Athletic Bilbao.  Bilbao started the year 3-0, but now look like a lost club as far as victories.  Villareal was unable to get their season going as of yet.  The club could not find the net in a 0-0 draw with Espanyol.

Valencia was victorious on the road against Racing Santander 1-0.  The club remains among the best in La Liga.  Xerez and Malaga battled their way to a 1-1 draw.  Xerez will happily take the one point.  In the most shocking match of the week Sevilla handed Real Madrid their first loss of the season.  That puts the two clubs a game back from Barcelona and the Sevilla defense was able to contain the Madrid attack.  The final was 2-1 Sevilla and Kaka and Benzema were both goalless in this match.

Sporting Gijon put it on Mallorca 4-1 in the biggest offensive attack of the week for Sporting.  And in the final three matches Barcelona handled Almeria 1-0, Deportivo La Coruna achieved the away victory over Tenerife 1-0, and Athletico Madrid climbed up the league table with a 1-0 win over new boys Real Zaragoza.