Zidane Speaks His Mind Once Again 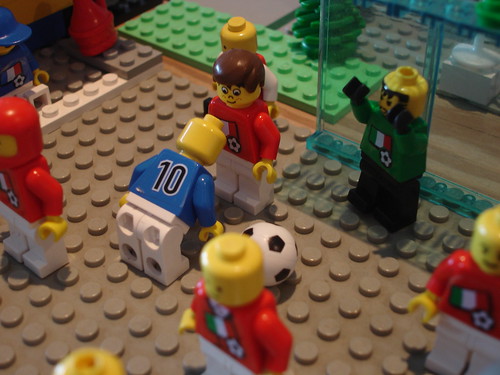 He probably is the most controversial modern day footballer when it comes to irrational decisions made in the World Cup, but when it comes to discussing France’s recent inner squabbles nobody is as cool and poignant as the head-butting master himself.

Zinedine Zidane recently spoke about the recent drama that has built up in France’s camp following the expulsion of Nicolas Anelka from the squad for his obscenity-laced tirade towards manager Raymond Domenech following Les Blues’ 2-0 defeat to Mexico.  And the legendary former team skipper claimed that the side never should of missed practice on Sunday and he also expressed his disappointment in an unknown player for filling in the media on the locker room feud.

Zidane went on to say that he thinks France still could survive Group A with a huge victory and a big break from the Uruguay-Mexico match, but he didn’t sound too optimistic of his former side’s chances of going far this World Cup.  In fact when discussing Raymond Domenech the French star didn’t have much nice to say at all.  He basically admitted that during his 2006 captaincy he complied with the manager’s request, but never had a particularly comforting feeling with Domenech steering the team.  He also expressed great interest in newly appointed manager Laurent Blanc taking over the reins once the tournament is over:

If they lose there’s a new coach in Laurent Blanc who will change all of this.  I don’t think you can blame one player or another, but Laurent Blanc’s arrival will change everything that is happening within the team.

It appears that Zidane is siding with the players in the issue rather than the under fire national team coach, but he did admit that Anelka was out of line and the rest of the team was acting a bit childish by not practicing Sunday.

And when it comes to childish antics at the World Cup who would know more about it than Mr. Zidane?