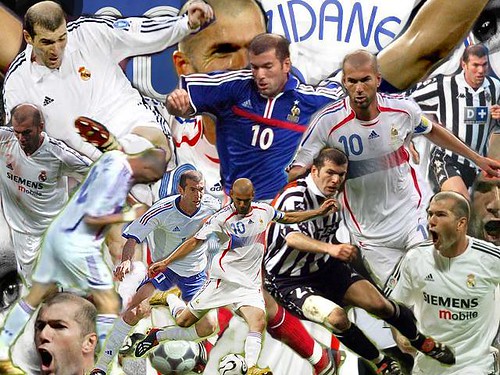 France legend, Zinedine Zidane, has weighed in on the disappointing situation the French currently finding themselves in after their opening match at the World Cup.

Speaking on French television channel, Canal Plus, Zidane said that Domenech is “not a coach” and that there was “no teamwork” on the French side saying that the team has “seen too many individuals”. The difficult part for France supporters to stomach is, of course, that Zizou is not terribly off the mark with his comments at all. In fact, I’d wager that he’s right on the money. With all the infighting going on in the French camp at the moment and Domenech’s truly perplexing squad selections (ie. In what world does a player play in the World Cup one month and then ship off the MLS the next? Looking at you, Henry) which have called not only the man’s competence but sanity into question, France is a mess.

Even when you do manage to put aside all the negative build up to France’s showing at this tournament, one only needs to look at the state of complete disarray that they were in when they took the field against Uruguay on Friday to qualify Zidane’s comments as fact rather than opinion. The proof is in the pudding, so to speak. With a midfield that was so jumbled and silent on the night that tumbleweed could have blown right down the French midfield completely undisturbed, the situation was dire. And where was Yoann Gourcuff? He seemed to have become the invisible French midfielder overnight. Tipped to be a big-time playmaker, Gourcuff hardly made an impact: stuttering every time he had possession of the ball, his passing and crosses poorer than a blind man’s. The situation up front appeared to be even worse. It was hard to distinguish whether Anelka was indeed actually trying to score a goal or if he had other goals in mind, like say, giving the world a masterclass on ‘how to be offside’. Henry, strangely, was the only glimmer of hope as he came on the park towards the end of the match causing a near-goal. In the end however, it seemed like nothing could save the French from, well, themselves.

Unable to beat a truly average side in Uruguay, whom many would say are the one of the worst teams to have qualified for the finals, having done so only by squeaking past a play-off rumble with Costa Rica, France have got big problems ahead of them. They expected to, and should have, been able to win against Uruguay. Instead, the best thing they were able to muster was the most meagre of draws. Whether they will slump back and ride the wave of disappointment to an early exclusion from this year’s tourney is yet to be seen.

France’s next group fixture is on Thursday against a tough Mexican side which they must win to be fully assured of progression to the next round.