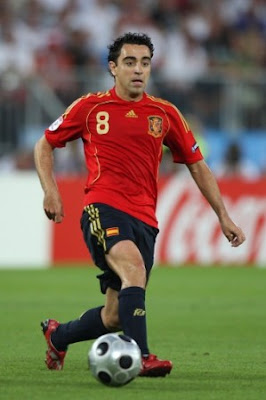 Spanish midfielder and Barcelona man Xavi will miss the next two Euro 2012 qualifying matches due to a minor Achilles tendon injury. The World Cup winning footballer’s team will have to play matches against Lithuania and Scotland without the star early next month and Xavi will join another superstar midfielder Cesc Fabregas on the list of inactive players for the two matches.

The two upcoming October fixtures take place on October 8th and 12th. Salamanca, Del Bosque’s hometown, is the host of the first match against Lithuania and the second match will be played in Glasgow four days later against Scotland. Neither match may look like that serious of a threat on paper, but both teams are actually ahead of La Furia Roja at the moment in their Euro 2012 qualifying group. Both opponents co-lead the group at the moment with four points earned in two matches apiece. But Spain has played one less match at the moment and is 1-0 with three points earned in an impressive display over Liechtenstein 4-0.

But Vicente Del Bosque is fully aware of the current standings in the table and the successful coach from this summer doesn’t want his side to feel too confident heading into these two upcoming matches just because of their recent success on the world’s biggest stage:

We have two big games, which are both extremely dangerous. This is a wake-up call for us. They are two very difficult games.

The two rivals are ahead of us in the standings, and both are important games in order to achieve qualification for Ukraine and Poland. To underestimate them would be dangerous. These are teams that have proven to be difficult and complicated. Lithuania are a well-organised team which leave no spaces and has competitive players. Scotland, playing at home, will be difficult. We cannot make the slightest mistake. We are prepared for difficult games.