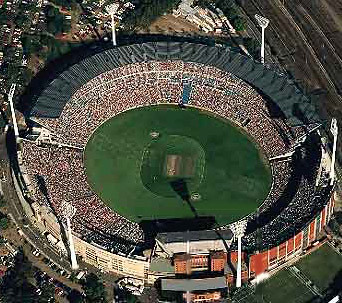 Yesterday when Spain battled Germany for the right to earn a World Cup finals berth another type of World Cup landmark was set.  The South African World Cup joined only two others before it in existence as one of only three in the history of the event to surpass 3 million spectators.  The semifinals match was expected to be the date that the estimated number of fans would reach 3 million total and the only other two previous Cups in existence that reached the remarkable feat was 1994 USA and 2006 Germany.

FIFA claims that heading into Spain-Germany yesterday 2,997,000 people attended the first 61 matches of the World Cup final for an overall average attendance per match of 49,134.   Of course with three games still left to play this statistic was expected to rise even higher over the final stretch of games as well.  And considering the overall unpopularity of the selected destination and the high number of vacant seats in the initial rounds of the World Cup final, I’d say that this is quite a feat especially considering it was Africa’s first hosted World Cup event.

But just over 3 million tickets sold isn’t too shabby either and I’d say that has to be considered a great success for the African nation.  After all only two other World Cups have topped that number.