Why are Chelsea linked with a move away from Stamford Bridge? 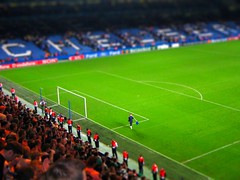 Chelsea Football Club, historically associated with Stamford Bridge – their stadium even when the club was only a small size compared to what it is now, are planning, or at least trying, to move away from their traditional home and develop a new 60,000 seater stadium. Thankfully, for Chelsea fans, the proposed new stadium at Earls Court, which is by no means a guaranteed venture, is hardly a million miles away and part of the proposed area for development is, in fact, even in the same borough of London. Chelsea, renowned, like neighbours Fulham, as being a club situated on the river Thames have consistently publicly addressed the need for the club to find a new arena in order to continue growing.

Competing against Arsenal and Manchester United, who with The Emirates and Old Trafford, have stadiums far larger than Chelsea’s own Stamford Bridge is a difficult task because the other clubs are continuously generating far more revenue through their turnstiles. It is well known that Arsenal have transformed their finances since moving to the Emirates and redeveloping their old Highbury home. It appears that Chelsea have something rather similar in mind, hoping to create a new stadium on the site of the Earls Court Exhibition centre, which is scheduled to be closed after the 2012 London Olympics, and redeveloping their current stadium, Stamford Bridge, which sits in a very desirable and expensive part of London, suggesting any development of the stadium into apartments or homes would generated tremendous returns for the club, similar to what Arsenal received after redeveloping Highbury into a plethora of high end flats. The Earls Court proposal is far from confirmed although it is Chelsea’s apparent intention to find a new stadium that is most interesting. If the Earls Court proposal falls through, and many analysts expect it do so, then the club are expected to consider redeveloping their current site, Stamford Bridge, partially or even entirely.

Chelsea’s haste is understood to be based on the impending new financial regulations on clubs set to be introduced by UEFA in the next few seasons, restricting a clubs ability to spend on transfers beyond its means and, thus, attaching a limit to spending connected to turnover and revenue generated.