Who will be this seasons top goalscorer in the Premiership? 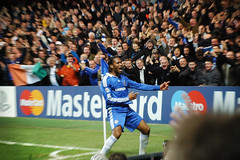 Who will be this seasons top goalscorer in the English Premiership? At the start of the season there would have been a few obvious candidates and a number of outside shots who still, clearly, had a realistic chance of winning the golden boot trophy in the Premiership. The first two names on everybody’s lips would have been Chelsea’s Didier Drogba and Manchester United’s Wayne Rooney. The Ivorian Didier Drogba was last seasons top goalscorer in the Premiership and began this campaign in similar fashion although of late the goals have started to slow down.

Wayne Rooney, on the other hand, is miles away from the top of the chart. He has scored only a solitary Premiership goal this season and even that was a penalty. The English striker is a long way from full fitness and top form so it would take an astronomical effort to make up on the last ground, with over a quarter of the season past, and be the Premiership’s top goalscorer at the seasons end. The Manchester United forward made his comeback last weekend against Wigan Athletic and will surely fancy his chances of scoring a goal in the next few fixtures, perhaps even reckoning that if he does he might quickly climb up the chart.

A couple of other players who would have considered themselves good chances to win the golden boot include Fernando Torres of Liverpool and Jermaine Defoe of Tottenham Hotspurs. Both, unfortunately, have suffered from injury problems of late and therefore have not proven to be consistent threats. Jermaine Defoe was scoring goals at the start of the season but has since been out with an injury and not featured so it has been impossible for him to rack up the goals. Fernando Torres was injured earlier in the season but is currently in good fitness and even good form, but it remains to be seen if his enforced absence in the early part of the season will have a big impact on his chance to be top goalscorer. Fernando Torres did, after all, remind us of his predatory instincts against Chelsea when he scored two goals and the Spaniard will surely reckon that if he can score two goals against Chelsea, like he did, then he can surely score plenty more against some of the lesser teams in the division and so he too will believe that he has a good chance of being the top goalscorer in the Premiership at the end of the season.

Some others, like Andy Carroll of Newcastle and Darren Bent of Sunderland, are proving themselves capable of scoring a number of goals but it remains to be seen whether they can score the quantity of goals necessary to usurp Didier Drogba and Wayne Rooney as the crowned Premiership hotshots.