What’s The Future For Balotelli? 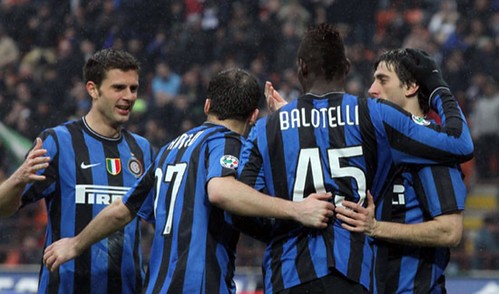 Last season wasn’t all glorious and fun for Mario Balotelli as he has had such a troubling time with Inter Milan after his fall out with the fans and some of Inter players, this fact has pretty much caused many speculation regarding his future at the club. Although the arrival of new coach could give Balo a chance to restart everything once again, it seems that the Nerazzuri’s fans and management staff cant really tolerate his unpredictable behavior for another season as the club’s president, Massimo Moratti, has recently stated that the young striker could be leaving next summer.

“We’ll listen to offers for Mario Balotelli. This team is strong and can repeat its success, even without Balotelli and Maicon.” Moratti said to the press, “We will not abandon any type of negotiation and won’t slam the phone down on anyone,” added the President.”

Reports from Italy have suggested that there are at least two English club, Manchester City and Arsenal, that seriously prepares an offer for the Italy under 21 international. Both teams have their own advantages that could attract Balotelli’s attention, Arsenal with Arsene Wenger’s strong capability in developing youngsters while City have Roberto Mancini, who was Balo’s first coach at Inter.

However, between those two teams the Citizen looks to have the edge on the young striker as not only Mancini’s factor the fact that the club have such a strong financial support would make them easier in agreeing to any kind of amount Inter wants. The question left is how serious does City wants Balo’s service as the club seems high on pretty much every hyped players in all around the world, and they pretty much have a long list of renown players on their list beside Balotelli.

In truth, aside from those two English clubs there are one local team that the striker would like to play in, which is Inter’s arch rival, Ac Milan. Balotelli has been vividly showing his affection towards the Rossoneri in more than one occasion, enraging more anger from his current club’s die hard fans who at times have “told” Balo to switch color if he does love Milan more than the Nerazzuri. The striker has been spotted attending more than one home games that the red and black squad played last season and also confirming his love in several interviews

Unfortunately, this kind of transfer would be hard to happen, not because of the Diavolo Rosso’s tight budget policy but simply due to the fact that Moratti doesn’t seem interested in selling the striker to their rival club. The Inter’s president surely doesn’t want to make the same mistake he did in releasing the likes of Pirlo and Seedorf few seasons ago, letting the two changed their fates with the Rossoneri color after having such a awful period at the Nerazzuri.

It would be interesting to see what the future lied for the troubled striker as the choices he’ll made would surely affect his footballing career, especially with the ridiculous talent that he has. Choosing the wrong road would pretty much lead him into a disastrous future as if he fails to improve his quality and fix his attitude than his dream to play for the Azzuri might just be an utopia despite of his amazing techniques.