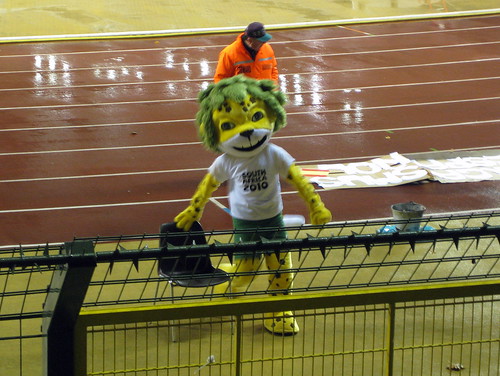 Carlos Alberto Parreira is the side’s manager and the Brazilian born skipper is looking to shake off South Africa’s disappointing African Cup of Nations run in 2008 by advancing deep into the World Cup this summer.  Parreira coaching career’s highest high was when he led his homeland of Brazil to the 1994 World Cup in the USA.   Parreira hopes to earn his second Cup bid this summer.

South Africa generally prefers the 4-4-2 formation although they usually prefer playing the diamond style midfield with an attacking midfielder up top near the forwards and the defensive midfielder supporting the back line.  So I guess you could refer to their plan of attack as a 4-1-2-1-2 if you want to.

Steven Pienaar of Everton fame is the most talented player on the squad and the midfielder will have to be the game changer with brilliant passing and strong long range finishing for the Rainbow Nation.  Benni McCarthy has fallen out of favor at times recently for his nation, but expect the aging EPL forward to contribute this summer up top.  Center back Tsepho Masilela is considered by most critics the side’s strongest defender on the back line and is the squad’s unknown soldier.

If South Africa wants to do well this Cup then they will need to rely on the huge advantage of playing in their homeland.  Over 75% of hosting nations have advanced past the first round of the Cup and around 25% have gone even further than that.  With a roster considered unknown to the globe, Pienaar will have much added pressure to perform at the highest level this summer.

South Africa doesn’t enter the tournament with too much success on the pitch in recent memory.  The Rainbow Nation failed to advance in the African Nations Cup and they were the only team that didn’t have to earn a spot in the World Cup this season.  Benni McCarthy and the offense lack that scorer in his prime and scoring goals against defensive minded clubs like France and Mexico might be hard to come by.

If South Africa was to do well this summer then they would be worthy of the war movie title Home of the Brave.  If the club stumbles out of the gate then they should be referred to as Hornblowers because that is all they will be remembered by.  Overall the Rainbow Nation does have the potential to advance to the second round and they did open some eyes in the Confederations Cup; but Mexico, Uruguay, and France are all more talented teams on paper and it will be a tough road for the Rainbow Nation.