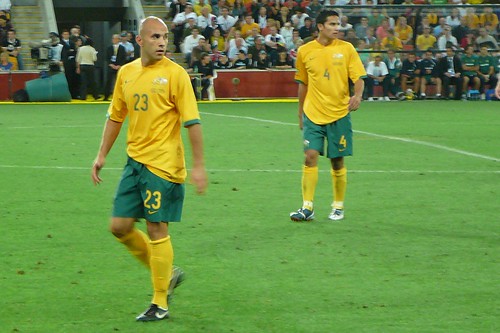 Born in Argentina, Gerardo Martino is a former midfielder who got into coaching around 1998.  Following a few manager stints in his homeland, the man known as El Tata moved over to Paraguay’s domestic league and took control of club Cerro Porteno.  Following a few seasons there, he moved to Libertad where he won plenty of trophies and was eventually given the head coaching job in 2006 following Paraguay’s disappointing first round exit in Germany.

El Tata believes in one of the more rare formulas for success in the World Cup with what is considered a 5-3-2 formation.  The lineup consists of three center backs, two wing backs, a right/ /left/and center midfielder, and two forwards up top.  The formation sounds like it overly stresses defense, but Paraguay actually has a very underrated offense.

Paraguay suffered a key loss this year in the worst possible way with the shooting of their star player and their most reliable goal scorer, Salvador Cabanas, in a night club bathroom.  Oscar Cardozo and Nelson Haedo Valdez have filled in considerably at the forward position and were the two most reliable scorers this WCQ.  Barreto is the side’s best midfielder and Paulo Da Silva is the key man on the back line.

Paraguay might not have the legacy or name power of a Brazil or Argentina, but the squad did do something historic this WCQ of 2010.  They achieved ten wins and 30 points in their division.  Although Brazil earned more points neither of the two powerhouses could achieve as many wins and in Argentina’s case less points as well.  Paraguay is on a mission this Cup and have a great shot of advancing past the first round and on.

Paraguay should be able to handle Japan and possibly Denmark, but the squad is a second round team at best despite their WCQ success.  Roque Santa Cruz is a fine player and should see some time out there, but the star forward didn’t see too much action this EPL season and is past his prime.  There attack game is above average as a whole, but their defense is made of mostly unknown players and is mediocre at best.  They do play five back to repair some of the damage, but truthfully they will need some more offensive firepower at some point in the tournament.

Hope and Glory seems to be a fitting title for the Paraguay squad this summer because this team is the best in recent memory for the strong football nation.  They achieved 30 points for the first time since the system was set in place and there nation is certainly hoping for some glory this summer.  As for the bad movie title what if their Delta Force becomes a Delta Farce on the biggest stage?  Wouldn’t that be embarrassing if Santa Cruz plays like Larry the Cable Guy?