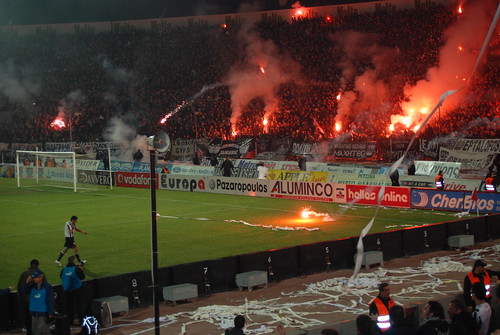 Operation Clash of the Titans

German mastermind Otto Rehhagel has had some of the greatest successes for his side’s football history in the last decade and has also experienced some of the greatest disappointments as well.  King Otto was given the crown in 2001 and although this summer will be his first ever World Cup berth, he did lead the Greeks to a 2004 Euro title.  The coach is also the oldest of any of the finals coaches.  Currently King Otto is 71 years old.

It may be Greek to you, but the squad usually goes with three men on the back line, four across the midfield, two secondary forwards and one finisher up top.  Considered a 3-4-2-1 Greece plays one of the strangest formations in the tournament with two secondary forwards, but it is hard to be too critical of King Otto’s devised scheme with his recent success.

Sotirios Kyrgiakos is probably the side’s MVP and the heart of the defensive unit.  Up top the Greeks possess a very underrated trio of forwards in Theofanis Gekas (the Euro leading scorer this WCQ with 10 goals), Dimitris Salpigidis will probably play winger for the side, and Angelos Charisteas has become a reliable #2 in the scoring department as well with 4 goals over the WCQ.

It is a long shot to have them in the finals, but Greece is one of the most underrated #4 seeds in the tournament and they have proven the notion of winning possible with their championship finish in Euro 2004.  With a strong forward game, considerable depth, and an experienced coach that understands his squad Greece could be the Cinderella story of the tournament.

One issue that teams like Greece will likely always have to deal with is their lack of pace.  Will their slow, but steady demeanor be enough to contend with fast paced squads offensive minded squads like Argentina and Nigeria?  The team will have pretty good depth, but against freakishly good teams I expect them to be outmatched.  Second round bid sounds like maxing out this summer to me.

Greece hopes that their lack of star power means that their team will play as a close knit family.  And since their loved coach is even given the title of royalty why not give the Greeks the movie title of a royal family in The Kingdom. After all the Greeks have been at the pinnacle of success in recent memory, so reaching that summit once again isn’t too farfetched.  But if the squad loses in the first round then the squad will be considered the Dogs of War by their beloved country.