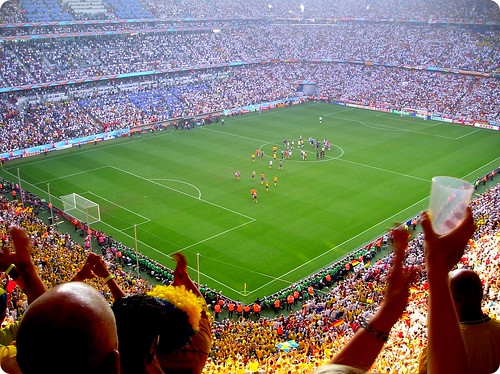 Following Jurgen Klinsmann’s decision to leave Germany after the summer of 2006, the Germans were left searching for a logical replacement for the legendary striker turned coach.  Right hand man and assistant coach Joachim Low was given the bid in 2006 and the former assistant has been around for about four years now.  This summer will be Low’s first chance to head coach in the World Cup final and despite the key loss of the team’s captian Low expects excellent results this summer.

Germany usually rocks the 4-2-3-1 with four defenders, two defensive midfielders, two attacking wingers, a center forward, and the striker to finish it off.  The nation is renowned for their technically sound style of play, tenacious defense, and excellent ability to finish the ball from around the box.

In Germany they are screaming MAN DOWN right now with the unfortunate loss of their captain and the heart of the team Michael Ballack during the FA Cup final for Chelsea.  The side has plenty of other players with World Cup experience including goal scoring machine Miroslav Klose.  The German finisher has scored five goals in two previous Cup making him the highest among active players this Cup.  Podolski, Gomez, Schweinsteiger, and defensive leader Philipp Lahm should all see considerable time on the pitch.

Despite losing their platoon leader and best footballer in Ballack, the Germans need to soldier on this World Cup without the Chelsea star.  Easier said than done, but the side still has an excellent defense and quality finishers that played in the Champions League final this season.  It is an uphill battle for the Germans, but they are one of the few teams that could pull off such an improbable feat after losing their best player.

Obviously losing you best player is a pretty big one and although the rest of the offensive minded players have a lot of experience and talent, I think their best years are past them on the international level.  The defense is good, but good enough to win it all against offenses like Spain, England, Brazil, and Argentina?  I wouldn’t bet on it.

Will the Germans shock the world and celebrate by hoisting Das Boot and then draining down the giant stein in a glorious German chug?  Or will the squad assemble a cast of players worse then Valkyrie?  As long as Klose doesn’t start wearing an eye patch than I’d say it is a safe bet that things will not get that bad.  But if they hire a bunch of English actors to play German footballers then trouble might be on the horizon.