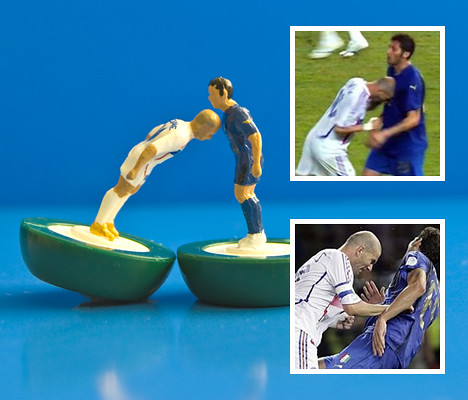 Manager Raymond Domenech has had his fair share of frustrating moments as the coach of Les Bleus and this recent WCQ almost resulted in the end of an era.  But the coach was able to survive the public embarrassment of missing the World Cup final all together and the former French league defender lives to fight another day.  Domenech needs the result this summer because A) he has never won a single trophy as France’s coach in six years and B) he is the longest running coach in France entire international football history.

Les Bleus are among the most conservative of the world giants when it comes to their plan of attack and often construct a formation with four defenders and two defensive minded midfielders supporting the back line.  Up top they are used to playing a diamond style formation with two wingers, a center forward/secondary striker, and a key speedy finisher.  Usually the formation is referred to as a 4-2-3-1

Thierry Henry is among the most notable footballers in the tournament and the aging Barca star is rumored to be heading to the MLS.  Henry will likely be relegated to the wing in favor of speedy striker and Chelsea star Nicolas Anelka.  Gourcuff and Ribery will likely take the final two attacking spots.  On defense Evra, Gallas, Abidal, and Sagna make up a talented group with Lloris protecting the net.

France has more to prove then just about anybody this summer.  The team is considered weaker than most of the Zidane Golden Years squads and their coach has received plenty of scrutiny for their poor results in recent memory.  They are the most talented team in their group, but that doesn’t mean that they are necessarily the best.  Anything less then a semi-final appearance will be considered a bust for the Frenchies.

The WCQ was plenty enough of an example of what can go wrong for the side.  My biggest problem with the French side is that although their defense is great it seems that they are way to content settling for the lower scoring nail biter.  They are loaded with top level talent and brilliant finishers, but only allowing four offensive minded players on the pitch could result in too many draws and not enough total points.

France hopes that they will experience the Great Escape this summer and prove all the critics that were hard on them wrong.  They need their attackers up top (Henry, Anelka, and Ribery) to have a Three Kings type of mentality this summer of scoring royalty, but I can easily see the side asking when it is all said and done, Is Paris Burning?  If they don’t get out of the first round then the answer is, “Yes it is.”