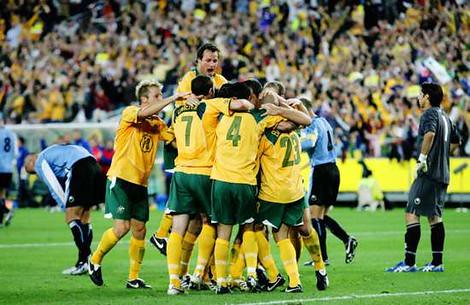 Operation Do It for Dundee

Management Down Under has gone Dutch over the last decade and following his tutelage as an assistant coach under the wing of the successful head coach, Guus Hiddink, from the 2006 World Cup final, Pim Verbeek is now the man in charge. Verbeek took over control of the squad after briefly leaving to coach South Korea to a successful Asian Cup run in 2007.  Verbeek looks to make a statement in his first crack at the World Cup finals as a head coach.

Australia is considered to be one of the most defensive-minded clubs in the tournament and last Cup they only gave up a handful of goals total.  The Socceroos love the 4-2-3-1 with virtually six defenders if you consider the two defensive midfielders to be on the backline.  They finish off the formula with the two wingers, center forward, and striker up top.

Center back Lucas Neill is the key man of the unit on defense and the longtime national team star and captain will look for some help in the net from the services of Mark Schwarzer.  Up top the team heavily relies on the aerial ability of center forward Tim Cahill of Everton and Harry Kewell out wide on the wing.  Brett Emerton at right winger seems to be a lock and Scott Chipperfield offers solid support off of the bench.

Australia has probably the most underrated defense in all of the tournament.  Last Cup it was a horrific call that ended their run at the hands of the eventual champs Italy.  This time around expect more of the same from the physical squad.  It isn’t the prettiest football to watch, but the Aussies know how to silence the opposing side’s offense.  Cahill will have to do the rest from there.

The Kicking Kangaroos were effective last Cup, but other then four or five players there side is completely mediocre at best.  Sure they only gave up four goals in the WCQ, but that was against a bunch of Asian zone competitors that are from countries I have never heard of.   Australia might be lucky enough to go to the second round, but no where further then that.

Will the Socceroos be Mick Dundee’s pride and joy this summer or will the Crocodile fanatic send the boys packing to the Outback (not the steakhouse, but the real Outback)?  Hopefully Australia will be known as Hogan’s Heroes this summer, but if they are not careful then they might be titled something worse like one Australian actor’s war film.  Will there be any Proof of Life for the Aussies following the event?  I doubt it, mate.