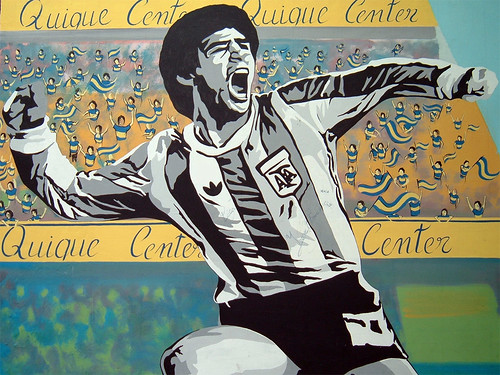 Operation Don’t Cry For Me

Diego Maradona is not only the greatest living former footballer/present day coach in the world, the World Cup winning star of the 1980’s is also considered one of the most controversial coaches in the tournament as well.  Several critics of the most beautiful game have questioned the legend’s roster choices and tactics at times over the last WCQ, but when it comes to winning the World Cup final as a player few can match the feats of Maradona.

Maradona isn’t a very easy one to predict when it comes to schemes, but I think Argentina will likely stick with their 4-2-2-2 formation that is composed of four defenders, two defensive midfielders, two attacking midfielders, and two strikers.  And much like France when you have that much talent in four positions it makes several offensive minded stars benchwarmers.

Nobody matches Argentina’s four headed monster on attack of Lionel Messi, Sergio Aguero,  Carlos Tevez, and Alberto Diego Milito.  The one problem is that there isn’t enough space for everyone including two likely league MVPs this season.  On defense Heinz and Demichelis are the key men in the middle and Mascherano remains a vital member of the side’s midfield along with Maxi Rodriguez.

Argentina only has their eye on one place in the World Cup and it is at the center stage.  They have the best player in the world and he is currently treading Pele type of dominance.  They also have a treble winning MVP striker, a critical forward for a successful EPL squad, and one of the youngest potential superstars in the game.  And that is just their forwards unit.  Argentina should score plenty of goals and a trip to the World Cup final sounds about right.

Maradona has proven at times to be a much better footballer then coach, but despite some strange moves including overlooking Zanetti and Cambiasso for the 30 man roster many still believe that he has a special knack for great things off of the pitch as well.  I don’t buy into that notion and I think the guy has some similarities to MJ in sports management.  Also the squad has a mediocre defense and keeper for the top level and that certainly does not help.

Lionel Messi has a chance to prove his world renowned Pele type of status with a Cup victory this summer.  If the Little Big Man can bring glory back to South America then he will earn the honorable title The Emperor and the Assassin for his formidable alliance with legendary former Cup player Diego Maradona.  But if Maradona’s main man proves to be a bust this summer in South Africa then he should expect to continue living life in The Emperor’s Shadow.  But one Argentine thinks he is the best ever.  And that is Maradona himself.