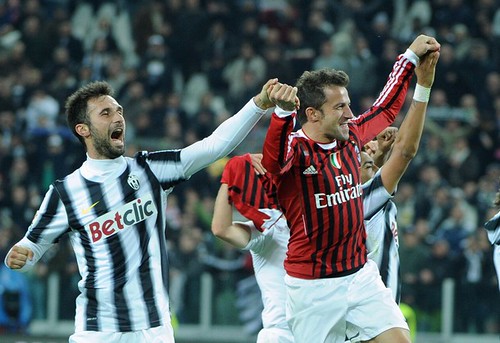 Juventus booked their ticket to the Italian Cup final after eliminating Ac Milan after a hard work as the match must be settled on extra time after the Rossoneri grabbed a 2-1 victory in normal time extending the game for another 2×15 minutes.

Mirko Vucinic was the Turin giant savior as his long range screamer in the extra time helped Antonio Conte’s team getting a 2-2 draw, meaning they’re winning 4-3 in aggregate.

Being staged as another potentially emotional game, the Italian cup tie turned out to be much more ‘controlled’ although there were some feisty challenges during the game but nothing really tense happened on the pitch. Losing 2-1 in the first meeting forced Milan to take the initiative in the first 25 minutes and managed to create several goal scoring chances from Zlatan Ibrahimovic and Stephan El Shaarawy which didn’t find the back of the net.

Against the run of play, Juventus took the lead with pretty much their first chance in the game as Alessandro Del Piero get ahead of Philippe Mexes before skipping passed goal keeper Marco Amelia and slotting the ball home. There were suspicions of hand ball though along with potential foul on Mexes before the goal happened but not much protest was being made anyway by the Rossoneri players as they get on with the game.

The goal sort of shocked the Scudetto winner as the match started to swing into Juventus’ favor although the chances were still rather equal until the half time whistle was blown. Milan started the second half with a different manner along with personal as Maxi Lopez came in for Ibrahimovic, who reportedly suffered a back problem, adding to the Swede’s previous flu illness which hasn’t really recovered as just yet.

Maxi’s entrance gave a different dimension to Milan’s attack as there’s more physical fight in the box with the former Catania player, continuously challenging with Juventus’ back line, causing plenty problems for them. Controlling the encounter once again, the Rossoneri got the equalizer through Djamel Mesbah who smartly run into the space before heading in Mexe’s excellent pass inside the penalty area.

Milan’s spirit rises again after the goal as they continue to dominate the match and eventually bagged their second goal through Maxi Lopez, who expertly shrugged off Giorgio Chiellini’s marking and blasting a vicious shot passed Marco Storari. The goal forced the semifinal to be continued with extra time as in 90minutes, the Rossoneri defeated Juventus, making the aggregate tied at 2-2.

Unfortunately for the Red and Black squad, it seems that pushing the match into extra time wasn’t the best option for them as they’re physical fitness obviously isn’t as good as Juventus at the moment, especially with continuous injuries which troubled them. In the end the Turin giant netter the goal that equaled the scoreline on the night through Vucinic’s long range screamer, putting them ahead on the aggregate with 4-3.

Milan players were dead tired for the whole half of extra time as they couldn’t really get their attack going again despite Juve sitting deep defending their advantage after Vucinic’s goal. In the end the Red and Black squad once again must content with a semifinal experience in the Cup, once again proving how Copa Italy has never really been a lucky competition for the Scudetto holder.