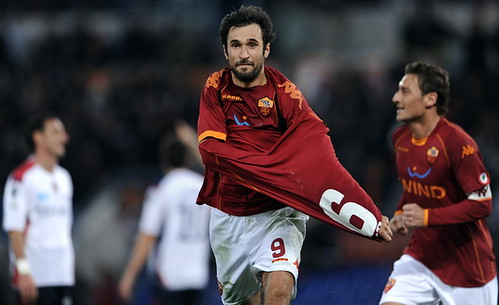 Should As Roma fails to improve their position in the Serie A table soon, they might be losing some of their important players and one of those players might be Mirko Vucinic.

This speculation occurs after the Montenegro striker stated to the press in England that he enjoy the interest that lots of Premier League team had on him recently.

Vucinic, who is currently in England to prepare for his country’s Euro 2012 qualifying campaign against the home team, also stated that he will give his best and try to play the best he could in keeping the attention alive. Although the striker didn’t specifically stated that he wanted to leave Roma, but his admiration of the EPL seems like a solid hint that should a good offer come and his current club isn’t doing well, the Montenegro international would probably accept it.

“I am very happy there is a lot of interest from the Premier League, and I hope to do my best and have a great game,” Vucinic said. “The Premier League is one of the best Leagues in the world. I just have to keep playing my football in the best possible manner.”

Despite of Roma’s poor form recently, Vucinic himself has been playing quite well considering that he has just returned from an injury in the early part of the season. The 27-years-old player have been scoring important goals for his club and country, netting the winner against Inter, Wales, not to mention the latest striker he got against Switzerland last Friday.

Being an important part of their team, Roma will surely try to keep their star around especially should Vucinic can produce the same performance he did for the capital club last season. However, with the Giallorossi’s current condition, the chance for keeping the 27-years-old player away from EPL teams’ interest won’t be an easy thing to do.