Why you ask?  Because it’s the unfortunate nature of the business.

It appears Real Madrid is considering the first casualty of the massive transfer fees the club has brought into the squad this offseason.  And it seems with Kaka, Ronaldo and Benzema on the way into the starting lineup their wouldn’t be enough room for Van der Vaart anymore.

The player on his future with Madrid, “The coach told me I won’t get much chance to play, so it’s not an option to stay here,” Van der Vaart told De Telegraaf.   “Real want to get my transfer fee back. I completely understand that clubs want to wait.  Of course I am interested in HSV, but it’s not the only option for me.  The most important thing is that I will play at a new club.”

Van der Vaart seems to have accepted his unknown fate for now and a move to German club Hamburg would make perfect sense, considering the attacking midfielder was on the squad nearly a year ago.  And so goes another repercussion of the transfer market.  And the domino effect begins. 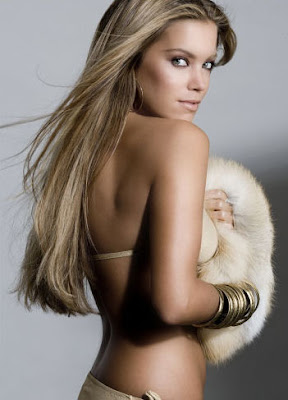 And of course poor Rafael Van der Vaart.  The player gave it his best effort and what’s he left with.  Millions of dollars and this woman as his wife.  Oh, the tragedy of another star athlete’s misfortunes. Rafael couldn’t you have done better than this woman.  I mean she’s only a 10.6 or 10.7 rather than a perfect 11.0.  Rafael you and your wife will be missed next year in La Liga.  More so Mrs. VdV though.