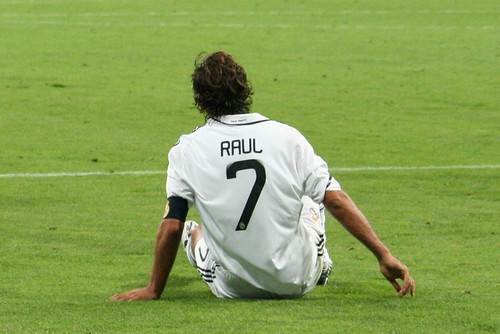 photo credit: JuanJaénIt’s no secret that Valencia is my adopted horse in the Spanish Premier Division, but now that they’ve fallen to 10 points back on the table and Real Madrid was able to get 3 points back against Zaragoza I’m starting to rethink some things I had assumed from the very beginning.

I had always said that I thought Real Madrid would crumble, but perhaps NOT in their own league (I bet they’ll lose to Lyon in the Champion’s League knockout phase) and I have to shift that “crumbling” status to ManU over in England.  Why? Because the apparent conglomeration of 4 superstars on 1 team is enough to great a 4-headed monster that stabilizes a team.  This is much like my “Sensei of Soccer” theory where I picked against my other adopted horse (RSL) in the MLS Cup final.  I learned that the “Sensei” wasn’t enough, but when Pat Morita has 4 heads I think Daniel-son has a much better chance of surviving a long and grueling season of Soccer.

There is no “Sensei” or or “4-headed monster” in Manchester, but there is in Madrid.  When Ronaldo was out FOREVER with his mystery injury they held fast, brought him back and THEN he scored twice in a Champion’s League beatdown.  That’s what the 4-headed monster does.  It gives you way too many options…way too many for most of your opponents.

Now, in Valencia they don’t have that…in fact, they don’t really have anything significant in the way of “bigtime superstar everyone knows their name international talent” but they were a good TEAM that played alot like the Detroit Pictons used to (and that’s how they stopped the Lakers 5-way Hall of Famer line-up) but that formula doesn’t seem to be working in Valencia.  Why?

Senseless draws to Gijon, Atletico Madrid, and Barca (yes they SHOULD have won that match) have made all the difference.  2 more points for each match and now you’ve got 6 more and now you’re only 4 out of 1st!  That’s got to be frustrating, but it can’t be so frustrating that you just KEEP doing that over and over?  Can it?  Valencia needs a new approach, a line-up “shake-up”, something that makes them more dangerous because, right now, everyone’s got them figured out.  (After that it’s a manager change I’m afraid…)