Valencia and Mallorca "On The Move" 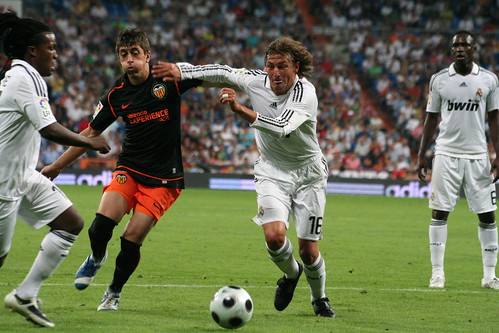 Valencia could go on a HUGE run in February…

By virtue of 4-1 and 2-0 victories on Sunday Valencia and Mallorca both made strong moves closer to the top of the Premier Division table.

Valencia put up 4 goals on Villareal in a match that was not nearly as lose as the score indicated.  Valencia has returned to an “attacking” style of Soccer that has put them within 8 points of Barcelona and a mere 3 points behind Real Madrid.  Having a relatively easy schedule and only showdowns with Barca on March 14th and Real Madrid on April 18th between them and glory the boys from Valencia should be feeling pretty good about themselves.

There is nothing right now in the way of Valencia except themselves.  Every time Real Madrid takes a step back Valencia can take a step forward in “one fell swoop” can tie Real Madrid for 2nd on the Premier Division table.

Mallorca stands at 33 points and successfully jumped Coruna by defeating them on Sunday.  With Mallorca so far behind the top 3 it is conceivable that they could be playing for 4th place, but that battle has been heating up all season as Sevilla falls and Mallorca and Coruna rise up.

It will be an interesting day on Sunday as Real Madrid takes on Malaga (which should be a win) and Valencia tackles Tenerife.  If Real Madrid loses again and Valencia wins then the two will be tied for the 2nd position in the Premier Division.

If anyone had told you at any point this season that Real Madrid and Valencia would be tied for ANY spot you would have laughed…but here they are on the precipice of equality.

Barca gets Valladolid on Saturday and if they were to lose and allow Valencia to close the 8 point gap that currently exists between them this could work out as I predicted.  Real Madrid falls slowly and Valencia gets into a dogfight with Barca for the lead in La Liga.

Imagine how important that March 14th match between Valencia and Barca becomes if they are duking it out for 1st place!  I can’t wait!