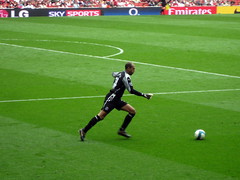 Mr. Robert Green wil probably never be Sir Robert Green now that the keeper has made one of the most memorable goalie gaffes of his generation (which includes a guy nicknamed “Calamity James”). The Deuce’s weak shot from outside the 18 sputtered against Green’s torso, and then miraculously spun over him and eeked into the net.

It was one of those moments in life when you feel like the world has somehow gone into slow motion.

If you think it lasted long too, just imagine how long it will last for poor Green. That mistake could have consequences that will haunt him for the rest of his career. They could also scare the bejesus out of ENG’s chances to hoist the trophy formerly known as the Jules Rimet. In the World Cup, every mistake is magnified, so now Green is the small ant underneath the English sports media’s magnifying glass. It wouldn’t have been so bad had Howard not been so good.

You see, Timmy had perhaps the best game of his entire career. Sure, he allowed one goal, but you can chalk that one up to Ricky Clark being completely unprepared to cover Gerrard. Otherwise, Howard made several heroic saves despite being cleated in the chest by Heskey in the first half. He was certainly the Man of the Match in my opinion. He was our one advantage vs. ENG, and we are extremely lucky that he performed like a champion.

The defense was a mixed bag, but I must give them credit for the result as well. Gooch and especially Dolo were crucial to keeping ENG out of the net for 85 minutes after Gerrard got tricky with Ricky. The midfield was generally poor. Dempsey’s goal (which still has me in disbelief) and a few tricky moves by Donovan (who Capello managed to mostly neutralize) were nice though. Altidore had our best chance of the day, but Findley & Buddle didn’t do enough.

Stu Holden didn’t have any time to do anything, so he gets a pass. Bob “Skeletor” Bradley is likely pleased with the result, but I do wonder if his tactics were a little too defensive to win the World Cup. Then again, Italy won the last World Cup and all they ever did was play defense. Capello must be pulling his hair out tonight and wondering why the Three Lions have no solid cats who can man the net. I bet he wishes he had Howard. He’s definitely Green with envy.

All in all, I must say that I am satisfied with the result, though I really did think we could beat them (and we could have). They were overhyped and we got a very lucky break. We handled ourselves decently though and I loved our perpetual hustle (even though it resulted in poor, hasty decisions sometimes). I think we have a game to build on here, and I hope we can learn from this experience against England and come out and best Slovenia and Algeria.