US Women Need Win Over Italy For World Cup Berth 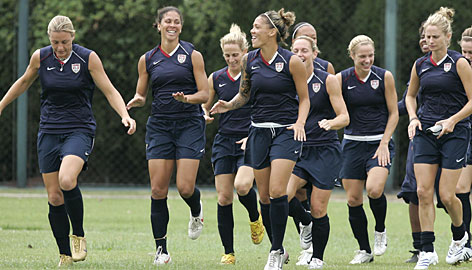 The U.S. women national team’s dominating career World Cup qualifying record of 19-0 took an unfortunate hit a week back when the former Cup champs suffered a surprising defeat to Mexico 2-1. The semifinal CONCACAF loss to their rivals put the squad’s chances of making the 2011 World Cup in serious jeopardy needing three straight excellent performances just to be granted an opportunity to play in the event set for next summer.

And following one match, the team is on the right track. The U.S. club won 3-0 last night against Costa Rica in a must win match for third place in the division and a chance to play in a knockout two match aggregate battle with Europe’s fifth place finisher which happens to be Italy. Lauren Cheney scored in the 17th minute, Abby Wambach scored twice in the match in the 33rd and 50th, and the U.S. are alive and well and ready to face the 11th ranked team in the world in a home and home battle for the final World Cup spot.

Wambach, the games MVP with two scores, claims that the powerhouse club was still “confident” heading into the critical match despite the recent lapse against Mexico:

We were confident going into this game. This was the first leg of the journey we are on. Obviously, it’s not the journey we thought it would be, but that doesn’t matter any more.

You have two games to show the kind of performance I know this team is capable of having. You can have whatever excuse you want in the world, but soccer is one of those games were any team can get beaten, even the No. 1 team in the world. It was a humbling experience. It’s an experience that hopefully is a wakeup call for everybody, and we’re going to work our tails off to make sure it never happens again.

It’s a valid point for Wambach to make considering the way the men’s World Cup unfolded last summer. Spain, the tournaments favorites, lost their first group match of the final to Switzerland and had all the past historical odds of winning the Cup against them because of the bad debut match. But the club overcame the early defeat by playing flawless football for the rest of the Cup and eventually they won because of this.

Now the U.S. women have experienced a similar “wake-up call” and have the opportunity to do something similar to Spain’s run this summer. But the one key difference was that Spain was already in the tournament when they made their blunder; whereas the U.S. women are just trying to make it to the event.