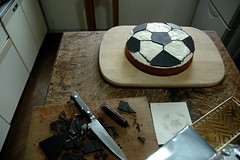 The Hosts: Abby Wambach & Freddy Adu, welcome to your surprise joint birthday party. No, Freddy, that does not mean you will be receiving a surprise joint, it just means we are going to celebrate both your birthdays (which were actually yesterday, to be honest) at the same time. That is why we are here @ The (Pizza) Hut to honor the feats you have performed over the last (21 for Freddy and 30 for Abby) years. No, Freddy, seriously I don’t have any ganja.

The Toasts: Just relax man. I know you missed out on the squad going to South Africa, but come on. OK, anyways, let’s get back to the festivities, shall we? Abby & Freddy, together you sound like a bank, which is fitting because you have made bank for US Soccer. Especially you Abby, with your outrageous stats (137 caps, 105 goals). Freddy, you have done some great stuff for the youth sides and hopefully in 2014 you can finally fulfill your potential for the US.

The Roasts: But, Freddy, overall your career has been a disappointment. You have 15 caps, sure, but you have not made yourself into the player Pele promised you would be in a commercial that aired almost a decade ago now (God, I am old). Meanwhile, Abby cannot be roasted because she is the apple of every US WNT fans’ eye. I guess the only thing she has never delivered is a World Cup (two 3rd place finishes). If she gets one next year, she’ll become a legend.

The one thing you both have in common is that you both played soccer with boys much older than you while you were growing up. I hope you both have a happy (belated) birthday and good luck in your future endeavors.