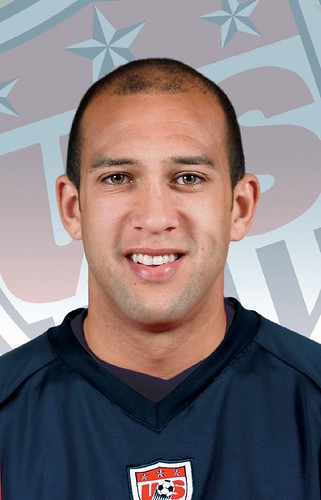 Briefing: Agent Tim Howard (aka “The Toffee Tipster”) is the emotional leader of the MNT. As a member of the organization since 2002, he has taken part in over 35 missions, and his contributions have been hailed as one of the main reasons for the MNT’s recent success. He will be charged with the task of protecting the MNT’s net in 2010.

Special Skills: Agent Howard is reputed to be one of the best keepers in the world. He wasn’t always held in such high esteem though, and he began his career in his home state of New Jersey with a rogue group known as “the Imperials”. He moved on to MLS before heading across the ocean to play in the Prem with Manchester United and Everton.

International Actions: For the first few years Agent Howard was involved with the MNT, he served as a low level operative supporting Former Agent Keller. In 2007, he stepped into the role of keeper and he has been very good ever since. He is perhaps the MNT’s most important cog, and he will need to deliver in 2010 for the US to succeed.

Mission: Agent Howard’s mission, should he decide to accept it, will be to keep other foreign organizations from inflitrating the MNT’s net. If he can keep his sheets clean, he will likely lead the MNT deep into enemy territory and perhaps even to the Mission 2010 ultimate goal, the World Cup Final. This message will self-destruct in five seconds.