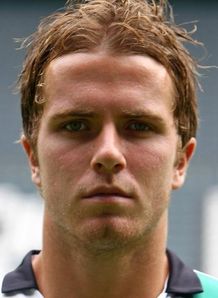 Briefing: Agent Michael Bradley (aka “The Prodigal Son”) has emerged as a fixture in the middle for the MNT. The son of Director Bradley, Agent Bradley was formerly known for his hot temper and inconsistent play, but he has matured quickly and is now a leader for the MNT despite his tender age. Come 2010, he could be the MNT’s field general.

Special Skills: Agent Bradley is very valuable to the MNT because he can contribute on offense and defense, making him a versatile mid. He is currently in GER plying his trade, and recent results have been very good. He always seems to be in the right place at the right time, and he plays with a reckless disregard for his body. He is a fine player.

International Actions: Despite not playing with the MNT until 2006, Agent Bradley has already appeared in nearly 30 matches with the first team. In a recent mission against Mexico, he scored two goals and lifted the US to victory. He will be a starter on the MNT for a long time, and I imagine he will make the Director very proud in 2010.

Mission: Agent Bradley’s mission, should he decide to accept it, will be to maintain possession for the MNT in midfield and dish the ball to its attacking agents. He will also be expected to notch a few goals of his own and provide invaluable defensive support. I believe he is ready to lead during Mission 2010. This message will self-destruct in five seconds.