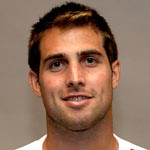 Briefing: Agent Carlos Bocanegra (aka “Carlos the Jackal”) is the defensive leader of the MNT. He is reputed to the the organization’s main captain and their physical leader on the field. Born to a father with Mexican heritage, Agent Bocanegra has become a fixture in the starting lineup for the MNT. He is expected to play a big role in Mission 2010.

Special Skills: Agent Bocanegra plays primarily center back, though he is a versatile operative and he can play on the outside as well or even in a defensive mid spot. After starting his career in Chicago, he moved to England for a long while before ending up plying his trade in France. He is not only known for his defense, but also his nose for the net.

International Actions: Agent Bocanegra has served the MNT since 2001. During his tenure, he has played in over 60 matches and scored 10 goals. He started two of the MNT’s games during the disastrous Mission 2006, and since then he has been the most often used player in the middle of the defense for the MNT. He’s a leader, and a good one.

Mission: Agent Bocanegra’s mission, should he decide to accept it, will be to assist Agent Onyewu in protecting the middle of the MNT’s defense from infiltration by international opponents. As this is likely his last major mission, he will need to bring his best with him to South Africa to help the MNT succeed. This message will self-destruct in five seconds.