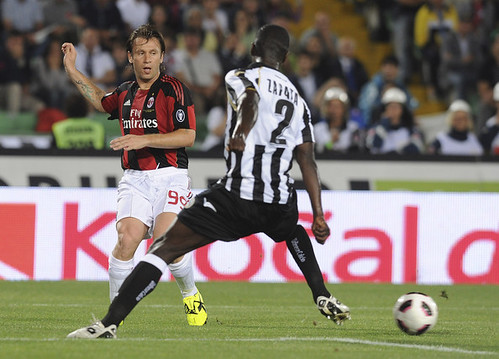 Successfully topping the Serie A table once again, Udinese through their manager, Francesco Guidolin, once again revealed that winning the Scudetto isn’t something that his team are targeting especially with top teams such as Juventus and Ac Milan are starting to find their form.

Speaking to the Italian media, Guidolin confessed that the main goal for his team this season remain unchanged from last year, which is qualifying for European competition, obviously getting into the Champions League again would be the main issue for them.

Although acknowledging the delight of leading the Serie A table for now, Guidolin believes that Milan and Juventus are pretty much the team to beat for the title at the moment, especially the defending champion whose the coach believed have finally stepped up their gear. The ex-Bologna tactician also believed that Inter Milan could still have a say in the league especially if the players can follow what Claudio Ranieri wants as the Nerazzurri still possessed plenty quality on their rooster.

“The real objective of my team is to stay in the European qualifying zone, certainly not the Scudetto. Having said that, being up there on top of the table is a marvellous sensation. However, Milan have turned on the turbo and when they are in good shape, the Rossoneri can even beat Barcelona. Juventus are just behind Milan, as Antonio Conte has done well to bring the locker room atmosphere of the past into the present. There is huge expectation around Napoli and it’s not positive to always want something more. As for Inter, if they can follow Claudio Ranieri’s teaching, then they’ll quickly climb back up the table,” Guidolin stated.

Udinese have really been performing really well in this early stage of the league as they’re leading the table on the same point with Lazioa and one point above Milan, Juventus, could’ve still be the leader but they’re weekend match against Napoli were called off. Guidolin’s team have only been beaten once this season when they were playing away against Napoli at San Paolo, but the Zebra’s home record have been perfect so far.