Trouble Comes Again For Benitez As Inter Stumbled Against Lazio 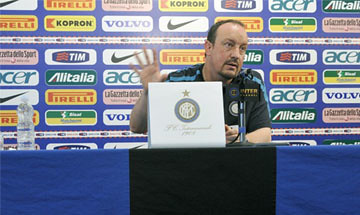 Just as things seems to get better for Rafael Benitez, the Inter Milan coach could found himself in trouble again after his team suffered a humiliating defeat against Lazio in the league.

The Spanish coach who temporary bailed himself out of trouble with two positive results last weekend, definitely should be concerned as not only beaten, his team were outplayed by the capital club.

Still having some injury issues and also the absent of their main goal scorer Samuel Eto’o, who is still serving his three match bans, the Nerazzurri were back into their unconvincing performance against Lazio. The home team that haven’t beaten Inter since seven years were truly inspired with their current league position and looking much more confidence as they take the attacking initiative from the first minute of play.

All of Lazio’s domination in the first period finally paid of in the 27th minute after Biava “accidentally” scored after deflecting Esteban Cambiasso’s attempted clearance in the goal line. The home team’s goal shocked Inter as they tried to react by increasing the pressure towards the capital side, however with their confidence getting stronger, the Biancocelesti managed to keep their lead into the second half.

Leading one goal, Lazio still play with more confidence and looked sharper than Inter, the home team finally made things worse for the defending champion just few minutes into the second half after Mauro Zarate successfully chipped the ball over Luca Castelazzi’s. Things could get even worse for Inter if Castelazzi didn’t managed to save few other opportunities created by the Biancocelesti, that are eager to match Ac Milan’s point in the top of the table.

However,a little bit against the run of play, Inter did managed to pull a goal back when Goran Pandev’s persistence in the box resulting in a goal, despite the Macedonian needed more than one shooting attempt to beat Muslera. Pandev’s goal lifted the away team’s spirit for a few moments as they managed to create few more chances before Hernanes simply took the sting out of the game by scoring a wonderful freekick that took a slight deflection, just two minutes before the final 90.

This league match could be Benitez’s last adventure with Inter especially if he failed to get a positive result at the Club World Cup competition that will start soon. The Spaniard is walking on a tight rope at the moment as the fans are mostly unimpressed with the way he managed the Nerazzurri, although the ex-Valencia coach could still argue that injury problems is what trouble his team at the moment, still the consistent poor performances from last season’s treble winning side is something he can’t really hide from anyone.