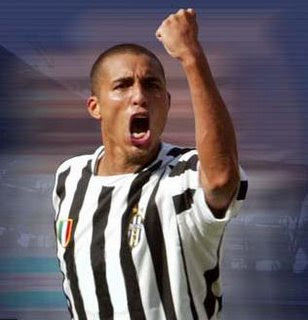 Over the last ten years very few players have made the impact that David Trezeguet has for Juventus.

The French former national team star has scored 171 goals for the league side and led the Serie A club to four league titles (not counting two that were removed).

And in the last few years the aging forward has struggled to remain fit for the grueling 38 week schedule and last year the forward rarely started for the struggling squad even when he was healthy. And Trezeguet’s large base salary became a burden on the cash-strapped squad over the last few years, so the Italian side has agreed to allow Trezeguet to leave one year before his contract was supposed to run out with his club.

And the forward’s new destinationis is now at La Liga side Hercules where the Frenchman agreed to a two year deal earlier today. The club recently gained promotion to the top tier and also signed Paraguay star forward Nelson Valdez who played excellent in this summer’s World Cup, but failed to see regular minutes for his former Borussia Dortmund side. Trezeguet and Valdez will make for a very underrated striking force for the new boys and both were added to the club in the last ten days of transfer window action.

But Trezeguet’s time in Italy has ended and the Frenchman is rumored to be interested in joining the MLS New York Red Bulls in 2012 following the end of his current La Liga deal, so that the striker can finish his career playing alongside former national team teammate Thierry Henry. But for now Trezeguet is property of La Liga club Hercules and this should make any fan of Serie A very sad.

Juventus president Andrea Agnelli praised his key finisher over the last decade in a press conference bidding adieu to the former Serie A Golden Boot winner:

I’ve been, like all Juventus supporters, very fond of David and his 171 goals in 10 years. A player with an average of 17 goals a season does not need any further comments. It’s been a real love affair, David will always be in the heart of all us Juventus supporters.