Transfer rumours on the 28th July 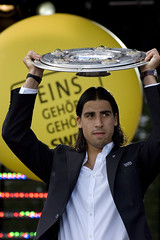 Luke Young, once of Tottenham Hotspur and Charlton Athletic, currently of Aston Villa, is close to sealing a £2.5 million move to Liverpool. The right back, who has featured for the England national side, is expected to take the place of Phillip Degen in the Liverpool squad, acting as an alternative to Glen Johnson, the first choice right back. During the last campaign Liverpool often required Javier Mascherano, the Argentinian central midfielder, to play at right back when Glen Johnson was injured. Luke Young, who is 31 years old, is also capable of playing at left back and might well be needed there on occasion now that Emilio Insua, the young Argentina left back, is on the verge of joining Fiorentina for £4 million

Sami Khedira has, allegedly, agreed to move to Real Madrid. German newspapers indicate that the only thing preventing the deal from being completed is the inability of the two clubs, Stuttgart and Real Madrid, to agree on a transfer fee. It appears that the players willingness to move is likely to force the deal through in the next couple of days. Stuttgart do not want to keep a player who wants to move and is not prepared to sign a new contract so the club are happy to see him move on so long as they receive a large transfer fee. Knowing that the player has stated he wants to leave Real Madrid believe they hold the upper hand and are trying to negotiate the players release for a relatively small transfer fee. A compromise figure of approximately £12 million is likely to be agreed.

Newcastle and AC Milan are apparently battling it out for Hatem Ben Arfa’s signature. Although AC Milan are clearly the bigger club and can offer European football, therefore making it more likely that Hatem Ben Arfa will choose to sign for them, Newcastle are prepared to make the signing permanent whereas AC Milan are only initially interested in a loan deal with a view to a permanent one at the end of the season. Marseille, who signed Hatem Ben Arfa from Lyon a couple of seasons ago, are reluctant to let Hatem Ben Arfa leave on loan considering they spent a sizeable sum to acquire his services in the first place but appreciate his desire to play for a club as prestigious as AC Milan. What does seem clear, however, is that Didier Deschamps, the Marseille coach, is willing to see the young French attacker leave the club from the southern French coast.

Stoke City, according to newspaper reports in the United Kingdom, are close to securing Roque Santa Cruz’s services for a fee approaching £9 million. The fee is almost exactly half what Mark Hughes, who was the then Manchester City manager, paid for Roque Santa Cruz a couple of seasons past. Santa Cruz has not had the best of times at Manchester City. He has struggled to stay fit and when he has been able to play his form was not good enough to warrant taking Carlos Tevez or Emmanueal Adebayor’s place in the starting eleven. Tony Pullis, the Stoke City manager, is quite clearly searching for another striker as he attempts to offload two others, James Beattie and Dave Kitson.