Tough Draws For Two Milans as Roma Goes To Ukraine 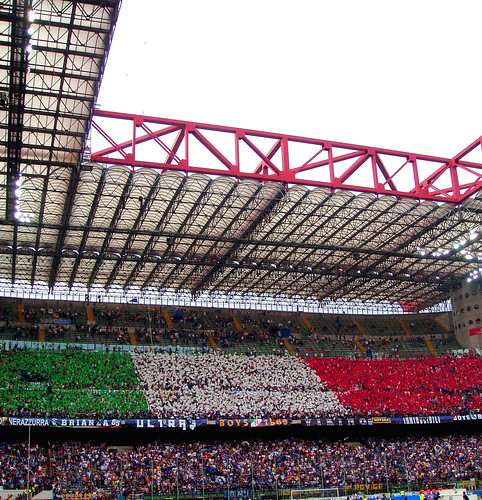 The UEFA Champions League Draws have just been done not so long ago and Italian clubs actually have an interesting opponents to play against, although both Ac Milan and Inter Milan can be considered having tougher tasks compared to Roma.

The Rossoneri will play Tottenham Hotspurs, that have been catching the eye lately, Inter on the other hand are set to face their rival in the UCL final last season, Bayern Muenchen, while Roma have to deal with the tricky Ukranian side, Shaktar Donetsk.

After getting Manchester United in the same stage last season, another English side is about to give another difficult test for Ac Milan as Spurs have shown that they are a quality side especially when playing at White Hart Lane. The London outfit destroyed Inter 3-1 at their home turf and only got beaten 4-3 while playing at San Siro this season, meaning the Rossoneri should really pay a good attention on the newcomer potential.

Gareth Bale, who attrackted Milan management in the summer, could be the danger man that Milan must contain if they want to beat Spurs although the London side does possesed many other quality players aside from the Welshman. The Rossoneri’s full back will be facing a stern task in the two leg fixtures, especially in the left side area as Luca Antonini still fails to repeat his exciting last season form, while Gianluca Zambrotta has already lost plenty of pace.

However, the solid display by Milan this season might just be enough to shut down Spurs especially knowing the fact that the Italian side have a very strong attacking line up that could really trouble the English side’s fragile defense. One thing for sure, it will be a cracking game that should produce a wonderful seeing for football fans as both teams possesed wonderful attacking thread that would tare apart any defenses.

Last season’s final got a repeat very early in the knock out stage this season and it will definetely produce another interesting sight for the eyes as Bayern will defenitely looking forward to take a revenge from last year’s failure. The Nerazzurri on the other hand, won’t give up that easily as their wonderful memory from last season might still be a good motivational assistant to help their course in eliminating the Bundesliga outfit.

Making things more interesting, both teams at the moment are not actually having a good run in their local league as they are sitting a bit far from the league table. Surely things might change by the time the competition re-start in February, still is the tension of the game might not be as heavy as last season’s final especially if Inter still unable to lift the quality of their performance under the guidance of Rafael Benitez.

On paper this looked like a draw that suits Roma as the Italian team simple have the bigger name than Shakhtar, but the Ukranian side are not to be taken lightly as they do manage to finish above Arsenal on their group. Shakhtar have some quality players as well that could trouble the Giallorossi, that are yet to find good concistency on their game this season especially in Europe.

Considering that Shakhtar have a very good home record, the Giallorossi might try to give more attention in the away fixture and maximize the game at Olympico if they want to eliminate the Ukrainian side. Although the odds are in favor of Roma, the match actually offers lots of exciting potential and possible twist and turn that would light up the Champions League this season.

Finishing as runners up on their groups, simply means that all of the Italian teams will be playing their first leg at home soil although considering Inter and Milan have the same stadium there could be some schedule shifting for the two city rivals. Surely playing the first leg at home might not be an good thing as whatever happened in the first game won’t actually decide the final outcome of the two leg, so full concentration especially in away games are a necessity for the Serie A teams.