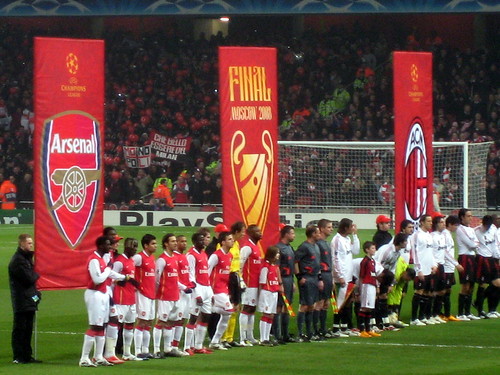 A tough task for Italian teams on their Champions League journey, especially for Napoli and Ac Milan who are being paired with two English representatives, Chelsea along with Arsenal, while a much easier draw received by Inter Milan, who faces Marseille.

Obviously playing against two Londoners, will be a difficult task especially for the Rossoneri, who have been having poor results against premiership teams in the competition for last few seasons.

Milan’s meeting against Arsenal will have to be noted as necessary path that the Scudetto holder must take in order to regain confidence and also acknowledgment in Europe, considering their recent poor record against English opposition in the competition. The Rossoneri obviously hopes that they’d have more luck during February especially regarding injury problems that can be considered as one of their hurdle in last season’s failure against Tottenham Hotspurs.

Napoli’s date with Chelsea will also be an interesting one as the Partenopei have a pretty good vice against English team after their success in knocking out Manchester City in the group stage. Of course the knocked out round have a different atmosphere but at the very least Walter Mazzarri’s team are not feeling any inferiority ahead of their meeting against Andre Villas-Boas’ team.

Meanwhile, Inter Milan have a much easier draw on paper, but Marseille shouldn’t be underestimated despite Claudio Ranierie’s team did have a pretty good experience against another French team. Lille. in the group stage. However, Didier Deschamps’ squad have more European experience compared to Eden Hazard and co, which were beaten by Nerazzurri, so which side are more prepared could be the one advancing from this tie.

In all, it’s a pretty tricky draw for all Serie A teams, one thing for sure, seeing chances in this early stage isn’t really something that can be taken for granted as a much more appropriate comparison should be made in February, when the battle starts. Which teams that have better form, conditions ahead of the double match ups, will most likely comes out as the winner, just like what happened in previous seasons.