Tottenham need to press on

by Andreas Vassiliades on August 3, 2010 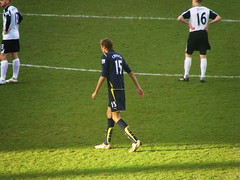 Tottenham won a pre season friendly against Benfica on Tuesday evening thanks to a nice goal from Giovanni dos Santos but the result betrayed the true story of Tottenham’s summer. Tottenham have stood still.

Thanks to last season’s fourth place finish they have finally made the breakthrough into the top four, after many years of trying, but they now appear to be contented. Such an attitude, for a team who only just made the breakthrough and will be threatened by the re-emergence of other teams this team, could prove to be disastrous. Of course Harry Redknapp, the Tottenham manager, has not disguised his yearnings for a couple of transfer signings, in fact he has been rather literal with the wish. Harry Redknapp knows this is an opportunity for Tottenham to cement a place with the big teams, to become a permanent fixture in the top four, perhaps even make a move for Arsenal’s habitual third place league position.

It might turn out that Tottenham’s greatest success this summer was not losing any members of their squad. It would not be the first team in history such an occurrence has happened. In a world where success is judged by recorded growth Tottenham would do well just to maintain. Perhaps being content will be a blessing. Only Harry Redknapp is not content, as usual, and is demanding more, as any successful manager is always likely to do, and chances are, Harry Redknapp, is right. Tottenham, a handful of points away from 3rd position last season, have an opportunity to improve. The base of the squad is good. There is a littering of talent in almost every position. The only criticism most Tottenham fans would have is that too little of that talent is genuinely world class. There is no single position where Tottenham might be called fragile or weak but, similarly, there is not particular position where Tottenham could be said to have the upper hand on any of their rivals.

Numerous in defence, and competent too. In midfield the options are plentiful too, offering a mixture of industry and class. In attack the team can rely on pace, aerial ability and decent finishing.

Nowhere, though, might it be said that Tottenham are exquisite. Tottenham have a squad that is large enough to cope with both Champions League football and the Premiership. In order to be successful in either, even relatively, Tottenham most probably need another star performer or two.

If Tottenham could muster the money to make a move for Robinho, or somebody of his ilk, it might propel Tottenham from a team who just made the last Champions League position into one who expects to make it and actually has designs on a title challenge, plus a forage for glory in the Champions League proper. Tottenham are close but they probably need to press on. If they don’t they might well regret it.