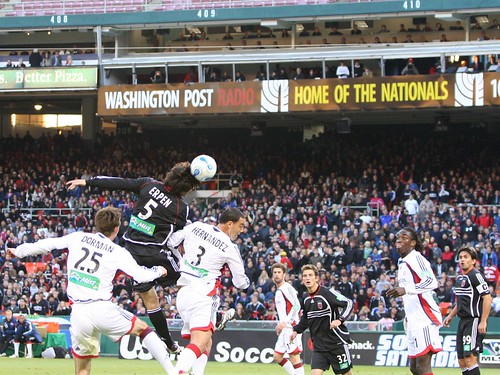 Last night’s Revs-United matchup on ESPN2 provided plenty of thrills. It was a standoff between two of the league’s best teams last year, both with many new faces on the pitch in 2008.

Here were my thoughts, stream of consciousness style, as I watched the game:

Pre-Match: Matt Reis’s dome looks extra shiny on the HD while he’s warming up. Almost looks like he’s had it specially waxed for the game. Parkhurst looks focused. I wonder if he’s glad he missed yesterday’s fiasco in Wembley? I also wonder whether Twellman is as hurt as he claims or just still sulking about not getting to go abroad? The pre-match commercials are horrifying. I still get chills when I watch the shoddy camera work in that horrible Dick’s ad with Olsen. But hey, did anyone else notice how freaking hot Olsen’s wife is? Total MLS Wag. Who knew?

00:01: And we’re underway. One second in, and I’ve already muted the announcers. During pre-game, Tommy Smyth lost his speaking rights when he literally said that Emilio was a good player, but like all strikers he was prone to enduring “streaky streaks.” Smyth is a good guy I think, but he is apparently prone to spewing forth nonsensical commentary.

10:30: Clyde Simms peppers a shot, but Reis is, as they say, “equal to the task” with the save. All DCU so far. The Revs can’t get the ball past midfield.

15:22: Goal for United. Gallardo earns an extemely questionable free kick and it results in a United goal from Emilio, who still looks out of shape, even when he scores. Reis couldn’t do anything about that one. 1-0 DCU.

25:03: The way this is going so far, Reis is going to need a hockey goalie’s equipment. He is just being blasted from every angle. Playing well so far though. But, he needs to, as Moreno is toying with the Revs defense.

33:45: This game could easily be 3-0 instead of 1-0. Moreno lifts a ball over the defense, but Emilio turns too slowly and fails to finish. Who knew Jaime had so much left in the tank? And Gallardo is playing marvelously as well. Maybe DCU has turned the corner?

44:34: Dube almost scores just before the whistle, but Wells shadows the shot nicely and pushes it out. DCU dominated all half, but nearly let the lead slip away. Such is the state of their play right now I fear (for Soehn’s sake).

Halftime: Geez, the Halftime Show should just be called the David Beckham Intermission. Here’s footage of Beckham’s 70 yarder last week in MLS. Now, here’s footage of Beckham’s trademark curling free kick to Terry’s head in England’s MNT victory over the US. Now here’s Beckham in all the commercials. I think I even saw him in the background of that Midol one. I am glad he is dominating and creating interest in the league, but I need a breather from Becks every once in awhile. I guess, in ESPN’s defense, there weren’t alot of other highlights from that international friendly though.

45:01: And we’re back. The Revs will need Joseph to overcome his frustration here in the second half and create some opportunities. As good as he is defensively, they really need him to start pushing the ball up the field more.

53:05: Ah, Fred. That lucky bastard. The Brazillian nets DCU’s second goal off a rebound. Reis was deflecting everything and anything that came into the box. The Revs defense just looks overmatched. 2-0 DCU.

59:34: And Cristman makes it a game again! He easily knocks home a deflected shot for the Revs. Wells is no Reis, my friend. 2-1 DCU.

66:50: Speaking of Reis, he makes another great save on an Emilio breakaway. Can’t help but think Emilio could have done a lot better with that attempt. He kind of just drilled it into Reis. 2007 Emilio would have tapped it past him and rolled it into the net. Who does he think he is ripping one like that when he has a one on one? Just slot it in the corner, no need to try to blast it through the keeper.

72:14: Dube does it again. A Ralston set piece results in a 2-2 tie. Hopefully, no one said anything racist or stupid this time.

85:21: Both teams are in “playing not to lose” mode. Just blow the whistle. It looks more like amateur wrestling than soccer. Where’s the Ultimate Warrior when you need him? Randy “Macho Man” Savage must watch the Revs and reflect on his own career body slamming opponents. Nicol likes a physical game, I guess.

Final: Well, it’s over. 2-2 tie. Great game. Or at least the first 80 or so minutes. DCU let this one slip away for sure. Reis has to be the man of the match. He had a plethora of saves.