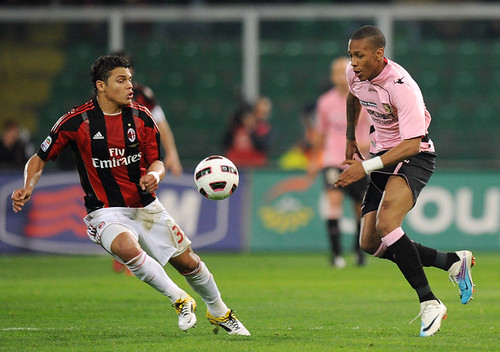 Ac Milan’s defender, Thiago Silva, still feel disappointed with the ghost goal incident which happened for his team during the big match clash against Juventus on Sunday.

The Brazilian international can’t believed how the officials could simply missed out on spotting the ball that has crossed the line for about one meter, adding that more technology or assistance should immediately be used in football.

Silva revealed that he would be one of the strong supporters for the usage of TV replay or even adding one more officials behind the goal, just like what has been done in Champions League matches. The Brazilian international stated that even he who was standing in the middle of the pitch could simply saw that the ball has already crossed the line, while the officials didn’t, that’s why an assistance or TV prove could pretty much stopped more controversies regarding the situation.

“I’m disappointed with what happened against Juventus. I’m stunned by the mistake of the linesman. I saw the ball go in from where I was in the middle of the pitch and he was in a position where he could see everything. I’m in favour of the use of TV replays or officials behind the goals – we have to have them in the big matches,” Silva said.

This type of incidents have really been an issue in several football games in the past few years as many controversies simply sparked because the ball didn’t touch the net or go further back from the goal line. The push for technology usage has been discussed for quite some time but apparently football boards such as UEFA and FIFA still haven’t given their agreement about it, stating that using more tools could simply diminished the element of surprise in football games.

Sulley Muntari’s unfortunate disallowed goal could pretty much be another additional case to push the usage of such technology in football since it has been implemented in several sports already. With the improvement of football this days, situation like this should already be avoided as the effect of such controversial decision could caused several improper conduct by the players of staffs on the pitch or after the game.