The Wizards defeat the Red Devils 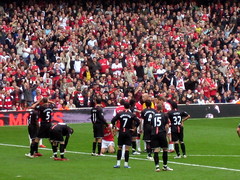 Davy Arnaud had put the Kansas City Wizards ahead before Jimmy Conrad, from the Kansas team, was sent off after 41 minutes for a last ditch tackle gone wrong which resulted in Manchester United being awarded a penalty. Dimitar Berbatov nonchalantly scored from the penalty spot but the lead lasted only a minute. Kansas retook the lead through a header from a corner. Kei Kamara was the goalscorer. Manchester United, for the following 40 odd minutes, were playing against 10 men but were unable to find the back of the net and equalise. A couple of decent chances were created but all in all Manchester United will be disappointed with their effort.

It was not for a lack of incentive or determination that the English side were unable to find a way back into the game but a lack of composure and creativity when it mattered. Defensively Rafael da Silva and Chris Smalling had disappointing performances. In midfield Nani might be excused his lacklustre display because it was his first appearance in pre-season and he has not played since a shoulder injury ruled him out of the World Cup in South Africa for Portugal. Between Federico Macheda, Gabriel Obertan, Tom Cleverley, Dimitar Berbatov and Mame Diouf there was barely a good passage of play to mention and it was only Danny Welbeck from the bench who showed any creative initiative. Manchester United, or more precisely Sir Alex Ferguson, will point out that many of the most important players of the squad like Antonio Valencia, Wayne Rooney, Rio Ferdinand, Patrice Evra and Nemanja Vidic are not on tour with the squad in America, they are recuperating and on holiday after their exerts at the World Cup. The point might be valid but it doesn’t dispute the fact that even without them Manchester United should be comfortably defeating the Kansas City Wizards.

Detractors will point out that this Manchester United team is overly reliant on two elder statesmen, Paul Scholes and Ryan Giggs, to provide the control and the creativity the other players need to display their talents. Displays like this will not appease the Manchester United faithful and Sir Alex Ferguson will need to motivate the squad and improve morale ahead of the encounter with the MLS all star side.

Roberto Mancini needs to do the same. His team lost today to New York Red Bulls.

Not a good day for Premiership sides in America, even if both teams were playing without the majority of their better players.